As the process of financializing the American economy accelerates, high-flying private equity executives, venture capitalists, and hedge funds managers are increasingly reaching their tentacles into everything. From tech to energy to health care, you name the sector and a so-called alternative investment company and its profit-taking fees are usually lurking somewhere in corporate financial statements.

Yet, as inexorable as this all seems, there is now a growing debate over whether or not it is appropriate for lawmakers to continue using more public money to support the trend. And San Francisco suddenly finds itself squarely in the middle of the fracas.

Before getting to the Bay Area's microcosmic story, consider some of the most recent trends.

In Sacramento, for instance, state officials running the nation's largest pension fund, CalPERS, seem to be raising red flags about alternative investments. As Pensions and Investments reported, CalPERS officials "have begun cutting the system's $5.3 billion hedge fund allocation in half" and have already been slashing its private equity allocations.

By contrast, in New York and Maryland, lawmakers are moving to dramatically increase the amount of public money given to high-fee, high-risk Wall Street firms. Not surprisingly, data from the Institute on Money in State Politics show the governors of those two particular states, Andrew Cuomo (D) and Martin O'Malley (D) just so happened to have collectively raised $3.6 million from the securities and investment industry - which is also the industry that stands to benefit from the allocation shift into these high-fee firms. Additionally, those two governors just so happen to be rumored to be considering presidential bids, which tend to be bankrolled by Wall Street.

That brings us to the heart of the data-obsessed Bay Area, where the wide divergence in public investment strategies have prompted an empirical question: which strategy is the most prudent for governments, taxpayers and retirees?

That was the query from Herb Meiberger, a board member of San Francisco's $20 billion municipal pension fund (SFERS). In a recent letter to Warren Buffett, the San Francisco State University professor asked the Oracle of Omaha for his opinion on SFERS' plan to go in the opposite direction of CalPERS and follow New York, Maryland and others in putting more public money into Wall Street's high-fee investments.

According to Pensions and Investments, Buffett's response to the SFERS board member was terse and clear.

“I would not go with hedge funds — would prefer index funds,” the Berkshire Hathaway founder wrote back to Meiberger.

That echoed Buffett's earlier directives to the trustee of his own will, which instructed that official to avoid alternative investments and "put 10 percent of the cash in short-term government bonds and 90 percent in a very low-cost S&P 500 index fund."

While private equity executives like Blackstone billionaire Stephen Schwarzman have claimed that high-risk, high-fee alternative investments typically generate returns that outpace the overall market, there is plenty of data showing the exact opposite. Indeed, Buffett has justified his position with an anecdote highlighting that data:

Mr. Meiberger said he got the idea of contacting Mr. Buffett after hearing him speak at Berkshire Hathaway's annual meeting May 3 about a bet he had made six years ago with a group of hedge fund managers on whether their combined funds would outperform the S&P 500 index over time.

Mr. Meiberger reported Mr. Buffett as saying that on a cumulative basis for the six years ended Dec. 31, 2013, the hedge funds had a 12.5% return; the S&P 500, 43.8%. Those figures explain the findings of a 2013 Maryland Public Policy Institute study showing that state pension systems putting the most in alternative investments and paying "the most for Wall Street money management get some of the worst investment returns" for taxpayers and retirees. Confirming Buffett's thesis about index funds, the study concluded that "by indexing most of their portfolios...state funds surveyed could save $6 billion in fees annually, while obtaining similar or better returns compared to active managers."

That would, of course, be a big financial hit for private equity, venture capital, and hedge funds making big fees off public pension systems - but it would be a boon for taxpayers.

The problems with private equity

With the Securities and Exchange Commission recently raising legal questions about alternative investments, those with a financial interest in keeping the high-fee gravy train rolling are fighting back. As just one example, the trade association representing private equity firms claims that its own review supposedly proves that private equity investments have and will beat index funds in the short and long term.

According to pension consultant Chris Tobe, one problem with these kinds of cheery estimates is that they are largely based on the private equity firms themselves setting their own portfolio valuations and thus controlling performance numbers. This is possible because private equity firms take investors' money for a set time period (usually a decade) and use it to buy private companies whose actual value is often not verified by any public market.

Sometimes unbeknownst to investors those private equity managers loot their portfolio companies through transaction fees, monitoring fees and leverage schemes, and sometimes they don't. Sometimes their much ballyhooed "internal rate of return" estimates are trustworthy ways to evaluate their performance, and other times those estimates are wildly misleading. But the bottom line is this: unlike the S&P 500, private equity managers' statements of supposed "returns" is typically their uncorroborated projection - and they don't usually release any underlying figures to justify those projections.

As financial analyst Susan Webber put it: "The fact that private equity firms continue to resist releasing the data necessary to analyze returns should in and of itself be a huge red flag" because those firms have an obvious financial incentive to game those projections to maximize their own fees -- potentially over investors' interests.

That latter data point may sound acceptable, except Webber notes that investors rightly expect far more because compared with, say, a publicly traded stock, alternative investments involve both a lack of flexibility (ie. money locked up for years in private equity firms' illiquid investments) and much higher risk of losses. As the CEPR and Cornell researchers put it: "If (private equity) investments don’t provide returns that handily beat a less risky and highly liquid stock market index fund, what is the point of investors paying private equity firms 2 percent of the millions in committed capital in management fees each year?"

Of course, those pushing governments to put more taxpayer money into alternative investments argue that doing so can be a shrewd move under certain market conditions. For example, they argue it can be a prudent maneuver to hedge against losses when the overall market is in turmoil and the index funds are struggling.

However, the flip side is that when the overall market is doing well - as it is right now - alternative investments can be a particularly dangerous move. As the CEPR and Cornell researchers explain:

The booming stock market has let PE funds exit investments via successful initial public offerings (IPOs) and distribute returns to investors. Investors have turned around and ploughed these returns back into new private equity funds; indeed, private equity fund raising in the first quarter of 2014 was the strongest first quarter since the financial crisis struck in 2008.

But successful fund raising means PE buyout funds have lots of cash on hand – so-called dry powder – that they need to deploy, and they are competing for a limited number of attractive companies. Along with the high stock market valuations for publicly traded companies, this competition among PE funds for desirable acquisitions has led PE funds to pay prices that are close to historic highs. In other words, even if you argue that alternative investments are a good idea in a bad market, allocating public money to those alternative investments in today's bull market runs the distinct risk of buying assets at overvalued prices, which subsequently risks big losses.

To illustrate that point, the researchers include an easy-to-understand graph charting private equity returns in comparison to the overall market: 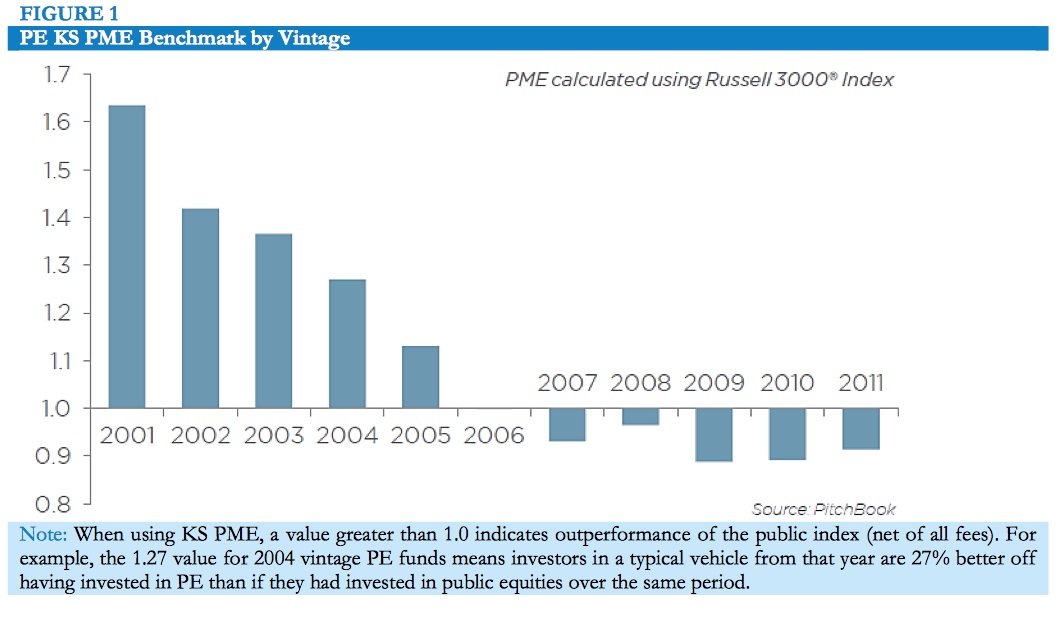 Noting that the S&P is doing well right now, the researchers conclude that "the cyclical nature of private equity returns does not bode well for pension funds and other investors who are currently piling into private equity funds." The same can be said of high-fee hedge funds, which are similarly trailing the market.

As evidenced by his warning to San Francisco, Buffett clearly comprehends these figures. After all, they aren't difficult to understand. But if that's true, why are so many public pensions nonetheless dumping more money into alternatives? Do they not get it?

The answer is that they probably do understand this stuff, but that some of them make different decisions, in part, because they are dealing with different incentives.

Think about it: unlike Buffett and other individual investors who work with their own personal money, politicians who control public pensions are investing other people's money. Additionally, unlike Buffett and individual investors, many politicians who oversee pension funds are trying to raise election campaign money - and a lot of that money tends to come from the financial industry.

Thus, with no personal resources in the game, but with a distinct political incentive to enrich potential financial industry donors, politicians who oversee public pension policy may have more of a motive to ignore Buffett and to ignore all the data buttressing his advice against alternative investments. They may be making financially irrational decisions for pensioners when they allocate yet more public money to VCs, hedge funders, and private equity mavens. Yet those decisions can be politically rational for the politicians themselves.

In the battle to control the $3 trillion pool of capital that now resides in America's public pension systems, the difference between financial and political motives may be the most insidious problem of all.