BuzzFeed knock-off "PlayBuzz" has added 53M visitors since February. But can it last?

Business Insider reported last week that BuzzFeed –the online viral juggernaut—appeared to be “tanking” in terms of its Facebook traffic. In March, BuzzFeed articles were shared 13 million times on Facebook. The number fell to 10.4 million shares in April, then down again to 5.9 million shares in May. Business Insider attributed this drop to a “decrease in quizzes being produced by Buzzfeed’s staff.”

At the start of the year, all of BuzzFeed’s most popular stories—in terms of Facebook traffic—were interactive quizzes. NewsWhip, which tracks how stories perform on social media, made a leaderboard of BuzzFeed’s ten most popular Facebook stories. In January, those quizzes filled every spot. In May, however, quizzes had dropped off the leaderboard entirely.

It was toward the tail end of May when I started noticing a new type of quiz popping up in my Facebook timeline. Theses quizzes looked similar to BuzzFeed quizzes, and the topics were similar to what you’d see on BuzzFeed. They had titles like, “Which Fairy Tale Best Describes Your Life?” and “What Sport Are You Meant For?” When I followed one of these links, I saw a website with a similar display, font, and color scheme as BuzzFeed. However, it took a moment to realize I was actually reading a bargain-brand version, called PlayBuzz. 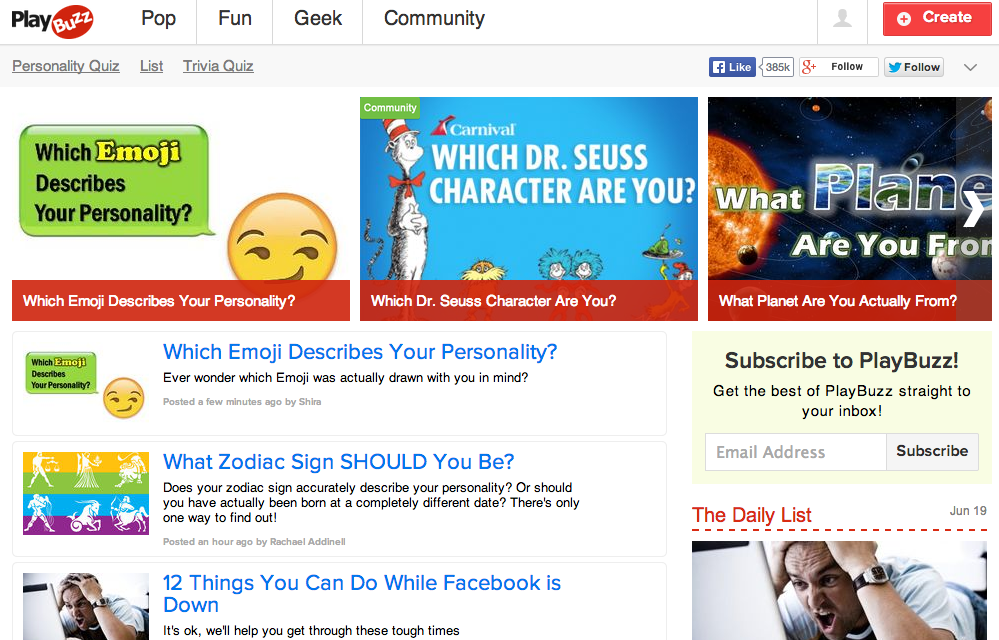 PlayBuzz is the Israeli knock-off version of BuzzFeed, and it’s growing in size like Jack’s beanstalk. The company, founded in 2012, is run by Tom Pachys, Yaron Buznach, and CEO Shaul Olmert. (If the name “Olmert” rings a bell, that’s because Shaul is the son of former Israeli Prime Minister Ehud Olmert.)

In unscientific terms, that is pure bonkers. Quantcast now ranks PlayBuzz as the 34th biggest website in the U.S.

Looking at PlayBuzz, it’s as if someone woke up in the middle of the night with a brilliant notion and said, “Hey, all that stupid crap on BuzzFeed is hugely successful. If we mimic it, we’ll be successful, too!” And it’s working.

One key difference between the two sites is that, while BuzzFeed strikes a balance between fluffy content and original journalism, PlayBuzz is 100% fluff: Quizzes, lists, trivia, etc. There is no mixture of high brow vs. low brow on PlayBuzz. It’s all candy. And unlike with ClickHole, there’s no sense of irony. Shaul Olmert really wants you to know what doughnut you are.

Another key difference is that PlayBuzz is more structured around user-generated content. Scroll down the homepage, and you’ll see more than half the posts have a green “Community” tag. The site provides free, easy-to-use content templates so that anyone can create and share their own games.  A person can choose from three templates:

1.) The Definitive Answer Quiz. (Can you answer these trivia questions about Coldplay?)

3.) The Personality Quiz. (Which member of Coldplay are you?)

Apparently there are two more templates coming soon: One called “Ranker”, and one which is labeled a “surprise.” (NOTE:  Until a couple days ago, PlayBuzz also offered a template called the “Two Choices Poll.”  It’s been removed, and I don’t know the reason why.)

BuzzFeed has their own Community section which offers a “superlist posting interface” for people to create their own content. However, the options are less fun—no trivia and no personality quizzes—and the process doesn’t feel as intuitive as on PlayBuzz.

Even high-brow cultural institutions are taking part in the quiz-making fad. Mark Caro of the Chicago Tribune described how both the Lyric Opera of Chicago and the Goodman Theatre created PlayBuzz quizzes in order to advertise their shows.

BuzzFeed is aware of PlayBuzz’s growing presence, and they don’t seem amused. Joe Bernstein wrote a short hit piece about PlayBuzz in March, calling the website a “knockoff” and a “clone,” and he emphasized a couple times how PlayBuzz was “owned by the son of the disgraced former Israeli Prime Minister.” While that last statement is certainly true, it came off strangely bitter. Several BuzzFeed employees tweeted links to Bernstein’s post, including Editor-in-Chief Ben Smith.

This raised an important question, though: Where was the dividing line between imitation and infringement? And how close does PlayBuzz come to crossing that line?

When PlayBuzz was originally conceived, it was called “PlayChanger.” Shaul Olmert actually registered the domain www.PlayChanger.net back in January of 2012. By June 27, 2013, the company’s name had switched to PlayBuzz, and Olmert was asking his Facebook friends to vote on the company’s new logo.

In an interview with DomainNameAdvice.com, Olmert said his company acquired the domain www.playbuzz.com from its previous owner for a “low four digit USD price.” Olmert then spoke about the importance of choosing the right domain name:

We are delighted to see that our users immediately “get” us, and the name PlayBuzz plays a [big] role in that….We find that they intuitively grasp what our vision is, even though nothing was written about us yet, and we haven’t made [any] public statement about what that vision is….

I’m a PlayBuzz user myself, which means I “get” them. And what I “intuitively grasp” about PlayBuzz’s vision is that they want to be like BuzzFeed.

After comparing both sites, I reached out to Brandon Butler, the Practitioner-in-Residence at American University’s Washington College of Law, to ask whether or not PlayBuzz’s site might constitute any sort of intellectual property infringement.

After viewing both websites himself, Butler said he didn’t think BuzzFeed could make either a copyright claim or a trademark claim against PlayBuzz. He said PlayBuzz was evoking BuzzFeed without copying it, and he compared the situation to how there was a stream of low-budget Star Wars ripoffs all appearing in the late 70s and early 80s. Those movies felt like Star Wars, but didn’t copy any of the characters. Likewise, with PlayBuzz: “It feels like BuzzFeed, but you know intellectually it is not BuzzFeed.”

Another comparison would be the bargain-brand cereals you see on store shelves with names like “Apple Rings” and “Crispy Rice.” These cereals are designed to feel like popular brands, but no one is really being tricked into thinking they’re purchasing Apple Jacks or Rice Krispies.

Butler said, “Plays on words can sometimes run afoul of trademark because they can deceive someone.”  He added, however, that the word “Buzz” was so frequently used and diluted nowadays that having “Buzz” in your name shouldn’t be a cause for controversy.

At the end of the day, Butler said, “IP law can tolerate a certain amount of wannabe-ness.”  The existence of PlayBuzz won’t tarnish BuzzFeed’s name or reputation.  And when you get to be as hugely successful as BuzzFeed, to the point of inspiring a whole genre of Internet content, you have to tolerate wannabes.

The big question remaining for PlayBuzz is whether it can actually sustain this incredible momentum it’s built up over the past several weeks.

PlayBuzz is a bit different from these other viral websites in that they don’t rely on sensationalist news stories or videos to drive interest. However, they’re still heavily dependent on Facebook to drive traffic. As Business Insider explained in an article last November, that dependency can make any company vulnerable:

Other startups that have relied heavily on Facebook have fallen hard. They include Zynga, Viddy, Fab, Path and BranchOut. The minute Facebook changed its algorithms and stopped promoting their products, their traffic nosedived. Viddy returned money to investors and pivoted. BranchOut pivoted. And Zynga's stock tanked.

Algorithms can change.  Trends can go out of style. A site could build a superior template for interactive games, in which case the Internet would beat a path to its door, instead.  So there’s no easy way to predict whether PlayBuzz will sustain their monstrous traffic.

BuzzFeed, meanwhile, has not suffered from a loss of unique visitors, despite their decreasing quiz traffic.  Their top story this week was a list—of course it was a list—titled: “21 Reasons Summer Sucks For Anyone With Big Boobs.”  It’s got over 10 million total pageviews.