Lyft is a black belt in using Uber's strength against it

I am no martial arts expert. But my understanding of the philosophy is that you excel by using your opponent's strength against them. In that respect, Lyft is a master of ride sharing jujutsu.

The more Uber projects its "private car" baller strength; the more Lyft says "that's cool, but with us, you sit in the front."

The more Uber pushes drivers away from its gleaming headquarters; the more Lyft has mixers and parties in the park and invited focus groups with top management at their offices. (And, on days like today, feeds them free tacos.)

The more Uber's CEO Travis Kalanick describes drivers as an expensive cost that he hopes self driving cars will eliminate; the more Lyft says it's whole thing is the personal connections between drivers and riders. In the front seat, fist pumping etc. 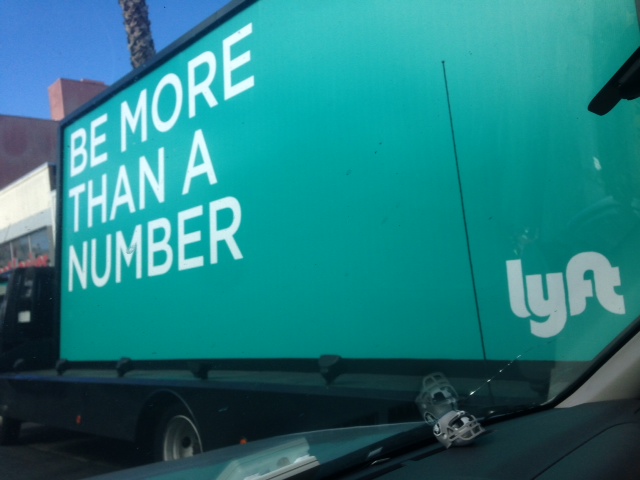 It's clearly a dig on Uber's colder more efficient relationship with its drivers and riders-- one that is boiled down to the almighty rating. Again, driver and rider ratings are one of the most genius things Uber did. It ensures I'm polite and on time in any car, because I'm terrified of mine slipping. Likewise, it ensures the drivers are the same or they get kicked off. And because the riders at least can't see them, we're always paranoid they might be lower than we'd like.

But, here again, Lyft -- which also has ratings-- is pushing against the idea that they are a perfect free-market solution to quality control. It's pointing to a thing we all love about Uber, and tapping into the downside of ratings.

What's happening with Lyft and Uber-- and its acceleration this year -- is one of the most interesting battles I've seen between two tech startups in my 15 years covering them. While so many number two market players try to compete merely on price or some extra twist or feature no one gives a shit about or just by copying, Lyft at every turn takes what is Uber's perceived strength and does the opposite.

Because it appears to be working, we lose sight of the fact that this is a hugely risky strategy. When one approach is clearly resonating with the market in a big way-- as Uber's does-- it's ballsy to think the exact opposite will also resonate.

A lot of people talk about the difference in terms of riders, but really it's the distinction in marketing to drivers that matters.

Drivers are the thing both need. That's the zero sum thing in this battle. The riders will follow the drivers. It's really the drivers that Lyft needs to keep positioning itself as the "anti-Uber" too.

Indeed, I recently starting using Lyft because in San Francisco the distinction from a rider point of view is diminishing. I was long an Uber user over Lyft, because I like the baller feeling of a black car and didn't want to particularly sit in the front seat and fist bump. But in the last week, I've taken Lyft almost everywhere. What made me change? It was simple. I noticed every since UberX driver I rode with also had Lyft, and after a month or so of that experience, I realized there was less and less of a difference between the two. Meanwhile, Lyft was offering 30% off all rides. It got to the point where it was silly not to switch. And when Uber offers cheaper rides, I'll probably switch back to them too.

A recent Lyft driver summed it up well, "There are differences in apps, and mustaches and all that, but really people just want to get from point A to point B. Whoever does that best will win." That means-- if they are smart-- the marketing distinction is really all about the drivers.

But for now, what I've found in a week or so of taking Lyft a few dozen times is interesting, and may be a pure anecdotal fluke. While almost all of my UberX drivers do both (and say they prefer Uber, by the way), almost all of my Lyft drivers have only done Lyft. When I asked why, they talked about this "not a number" emotional connection. I don't know if this is a widespread thing or Lyft can hold on to it, or replicate it in other markets. But any reason drivers are loyal that isn't about cash is gold in this war. Even hundreds of millions in venture capital can't sustain an endless price war.

Now, even if my experience is common in San Francisco, I don't think it is common in any other market. In fact, when I talk to people in other cities where both operate about why they take Uber more than Lyft, it's because the latter just doesn't have the drivers so it takes too long to get a car. Because Uber is still the market leader, for Lyft to have a shot at this playing out elsewhere it needs a service that can compete first.

Make no mistake: This is still Uber's game to lose. But Lyft continues to impress, given I never thought I'd get in a cheesy pink mustache car as long as Uber existed. Its relentlessness and jujutsu style should be a lesson to all startups playing catchup out there.