My Big Break: How the tech legends of Silicon Valley got their start

Before you have made it, no one gives a shit about who helped you out.

After you've made it, the story is all about you.

This is how it works in media coverage of startups. And it's kind of lame because it creates a fictional sense that successful founders are somehow born fully formed, springing out of Zeus's head. We know the opposite is in fact the case. Behind every founder are many people who helped them get their feet in the door, wrote them their first check, or even just believed in them when no one else did.

I fully realize that media outlets like Pando are part 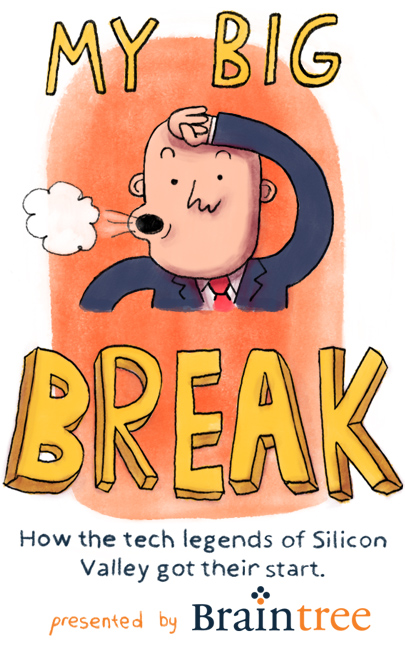 of the problem in spreading that narrative, of course, but this month we're going to be part of the solution too. Throughout July we'll bring you a series of interviews with Silicon Valley stars where they share the story of their first big break.

[Note: The entire series is being sponsored by Braintree's Ignition program, offering $50k in transactions free of fees, so you'll only see their ads around "My Big Break" pieces. But the series was conceived, commissioned and edited entirely by Pando. Braintree had no input whatsoever in the editorial. For more on our policy towards single sponsor series like this one, see here.]

In reflecting on the series, I was trying to think about who gave me my big break. There were so many. But my favorite story is of the old publisher of the Memphis Business Journal, Barney DuBois.

I was the editor of my highschool paper and convinced Barney to underwrite it. We had a mega-deficit and costs were out of control because it was still produced by moving print. I wanted Barney to help me migrate the entire operations to computers, and let us piggy back on their print run for a few hundred bucks a month. It was my first sales pitch where I felt like my life hung in the balance. For some reason, he agreed.

For the next year, every month I'd spend all nighters at the school's Mac lab (we didn't have a computer at home) and trudge over to his house in the wee hours with a floppy disk and a manilla folder containing photos. He'd always be awake. He'd always answer the door in a bathrobe, boxers, a cigar and a glass of scotch. And he'd always say the same thing: "Kid, you are gonna be a reporter. It's in your blood."

Every month I'd tell him he was wrong, that I was just doing the newspaper for high school credit.

As with most journalists I patterned myself after, he was right in the end. And some four years later, he gave me my first internship. Without Barney, you probably wouldn't be reading anything from me.

Stay tuned as more unknown heroes like Barney get shout outs all month. And if you want to give credit to someone who helped you out when no one else did, leave it in the comments. I'd love to read about them.

Sponsored message: Get $50,000 in transactions free of fees with Ignition, from Braintree.