I wrote yesterday how disgraced formed PayPal staffer (and medically proven non-crazy person) Rakesh "Rocky" Agrawal had banned employees from speaking to Pando after we began questioning his ability to fund his new startup, reDesign. At least one previously announced "employee" had already told us that, in fact, she had only been offered some freelance work.

Agrawal also went on a personal tear against me -- calling me an "asshole" in a now redacted LinkedIn rant.

It seems, however, I'm not the only one on the receiving end of Agrawal's abuse and paranoia.

A few minutes ago, my old friend John Handelaar pointed me to the latest of Agrawal's unhinged blog posts in which he offers employment at reDesign to anyone who can solve a puzzle completely unrelated to technology or apparently anything else. In it, Agrawal posts a photograph of his desk, including a bent out of shape paperclip, and asks "What is the paper clip for?" 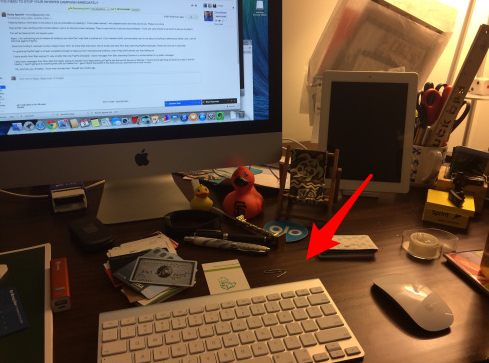 The email, apparently sent to PayPal employees "Christina, Anuj, Stan, Jennifer and Chris," demands that PayPal stop its "whispering campaign" against Agrawal, specifically the claim that Agrawal was fired.

It also claims that the company is lucky Pando is "too dumb" to have contacted PayPal to verify the circumstances in which Agrawal was forced out. (To be clear, we may be dumb in all kinds of ways, but reporting isn't one of them. We've confirmed our account with several senior PayPal execs.)

In the email, Agrawal insists that, contrary to what multiple sources have told us, he wasn't forced out after a pattern of bizarre behavior, including sending (in Agrawal's own words) "erratic emails" to employees at the company.

He says his lawyers will be contacting PayPal soon: "I will subpoena each and every one of you. Perjury is a crime," he writes. He also threatens the company that unless it stops talking to Pando and other journalists, he will used legal discovery to embarrass them in court.

But, he insists, "I am authorizing you to release all evidence you have that I was fired or pushed out. If you release truthful communication sent to me about my lacking in performance before I quit, I will not hold that against PayPal. "

Note, Agrawal only authorizes the release of emails sent to him, not any of the "erratic" messages he reportedly sent to PayPal execs. I've asked PayPal if they'll send me copies of any messages sent to Agrawal, and will update if I hear back.

On Twitter yesterday, Agrawal said he was represented by Chuck Marshall of Marshall Law Firm. The firm's website indicates that it specializes in consumer protection law and suing over defective products. Marshall told me yesterday "I like Rocky's plan. If I can make it work, great. If not, I move on." He also asked me to give Agrawal six months to prove reDesign is a serious company before I write anything more about it. "If it works, you buy me a beer & vice versa. [But] stop trashing it." (I appreciate the offer, Chuck, but I don't drink.)

As to the identity of the recipients, it seems pretty clear that Christina is Christina Smedley, who Agrawal previously referred to as a "piece of shit" on Twitter. In this latest email, he writes "fuck you, Smedley. You're even dumber than I thought you were two months ago." If I had to guess, I'd say "Stan" is VP of growth, Stan Chudnovsky and "Jennifer" is director of corporate communications, Jennifer Hakes. I've emailed both to see if they received the email -- and if they were amongst the original recipients of his previous "erratic" emails (and, if not, why is he singling them out for these threats?)  I'll update if I hear back on that too.

Given it's a sent email, not a received one, there doesn't seem much reason for it to be open full screen in the photo unless Agrawal intends it to be seen. Then again, the image also includes Agrawal's Amex card, in which the card number, expiration and security code is plainly visible. That's just plain dumb. (I've cropped that out of the image below for obvious reasons.)

Here's the relevant part of the image, with the text below...

Feeding libelous information to the press is just as actionable as tweeting it. You've been warned. I will subpoena each and every one of you. Perjury is a crime.

Saying that I was sending erratic emails before I quit is an obvious smear campaign. There is zero truth to it and zero documentation. You've just lucky Pando is too dumb to ask you to prove it.

You will be hearing from my lawyers soon.

Again, I am authorizing you to release all evidence you have that I was fired or pushed out. If you release truthful communication sent to me about my lacking in performance before I quit, I will not hold that against PayPal.

Good luck finding it, because I know it doesn't exists. But I do know what does exist: lots of emails and texts from Stan slamming PayPal employees. Those will come out in discovery.

I'm guessing PayPal legal is at least competent enough to keep you from manufacturing evidence, even if they didn't prevent you from libeling me.

I have emails from Stan saying i'm way smarter than any PayPal employee. I have messages from Stan slamming Christina in a similar fashion to my public messages.

I also have messages from Stan after the tweets saying he wanted me to keep working at PayPal and we will discuss on Monday. I tried to do the right thing and give you a way to end this clearly. I wasn't going to do anything else until you libeled me. I gave PayPal the benefit of the doubt and you used that time to fuck me over.

Oh, and fuck you Smedley. You're even dumber than I thought two months ago. I emailed Agrawal for comment on whether the email was actually sent to PayPal and if he intended for it to be visible in his post. Despite his vow not to respond to Pando, he replied almost  immediately...

Fuck. I should scour photos before I post them. The email is legit.

Update: Surprise! It turns out Agrawal was being deliberately dishonest in his response. Attorney Chuck Marshall responds to contradict Agrawal's statement, saying Agrawal "sent this pic to me earlier today. The email's inclusion was intentional. Looks like it found its mark." He also clarifies that his firm is not representing Agrawal, rather he is personally representing reDesign. But when I asked if he was comfortable with his client deliberately deceiving the press, Marshall responded: "I don't see it as deception, but sarcasm lost in email format."

In a final weird twist, Marshall confirmed: "I will be part of Rocky's team, but not necessarily in a law role."