Out of the battery fire, into the shareholder lawsuit.

Tesla shareholder Ross Weintraub has filed a derivative suit against the company and its board members -- including CEO Elon Musk -- alleging that a series of dishonest statements made about safety and profitability caused Tesla's stock price to drop on multiple occasions.

A derivative suit is a legal tool used by shareholders who want to force a company to take corrective action against its own executives or, in this case, to take action directly if board members are unlikely to act. It should be noted that, to many, shareholder lawsuits are like patent trolls: An unfortunate cost of doing big business and not something that inherently bodes badly. Also, in Tesla's case, their stock isn't that far off its 52 week high (Chart via Google): 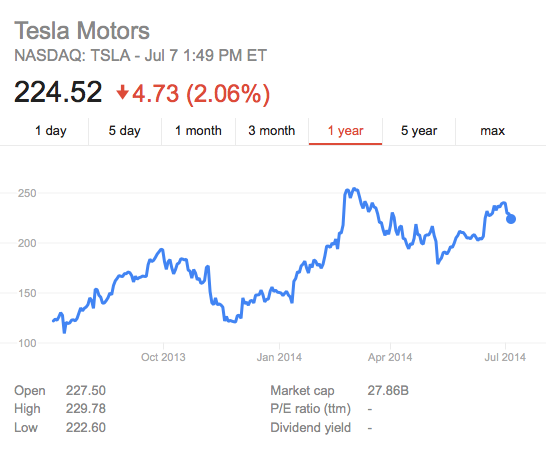 In the complaint, filed in Northern California District Court, and embedded below, Weintraub alleges a long history of dishonesty by the company and by Musk himself, including allegations that Tesla board members:

...allowed the Company to embark on a campaign of false and misleading statements designed to convince the market that the Model S was literally the safest car in existence."

...allowed the Company to misrepresent the low height and configuration of the Model S battery pack as enhancing the vehicle’s safety, without disclosing its very significant vulnerabilities for high-intensity fires."

...egregiously allowed the Company to misrepresent the Model S’s history of fire incidents which included at least three very significant fires requiring first responder intervention. And that Elon Musk himself...

...falsely claimed that “[t]hroughout all our crash tests, throughout all similar incidents with vehicles on the road, never once has there been a fire.” When a Model S fire later occurred during the relevant time period, a Tesla spokesperson falsely stated, “This is the first fire.” Thus, by the third Model S fire, the Individual Defendants were still causing or allowing Tesla to represent that there were low probabilities of such fires while simultaneously denying that a recall was necessary.

...gave several interviews during which he downplayed this Model S fire and worse, failed to disclose that another Model S had been consumed by fire in Mexico on October 18, 2013... According to allegations in the Federal Securities Action, defendant E. Musk, with knowledge of the fire and inspection, unilaterally determined that the fire was not relevant to investors due to the circumstances under which it arose. The lawsuit further claims that Musk and his fellow board members' conduct "has significantly and materially damaged the Company. By virtue of the Individual Defendants’ breaches of fiduciary duties, the Company faces a lawsuit alleging violations of the federal securities laws and Tesla has suffered significant disruption of, and damage to, its business, its reputation and goodwill."

It then goes on to list various conflicts held by board members which would make it unlikely that they would take action against Musk of their own volition. These include the fact that board member Steve Jurvetson of DFJ is an investor in other Musk companies including Solar City and Space X.

The suit demands a jury trial. The company has until the end of this week to respond or face a judgement by default.

Updated: A Tesla spokesperson told Pando "We believe this lawsuit is without merit and intend to defend against it vigorously."