Okay, so we were wrong about this one.

When Biz Stone debuted Jelly to the world, much of the tech press piled on the hate. After all, here was a super successful dude with the audacity to try something again. Bloggers hate that. And it was -- yet another -- Q&A app. We’re all frankly still stunned Quora hasn’t succumbed to the fate of Yahoo Answers.

And yet, Pando was one of the few places that gave Jelly the benefit of the doubt, writing about the fragmentation of communication, the power of adding photos to things that have already been “done” online, and the fact that Quora has struggled to adapt long-form answers to a mobile-first world.

CB Insights wrote yesterday that the app fell from number 15 in the social media App Store rankings immediately after its debut to being outside the top 100 by February. It climbed to that perch again in March when it added a new mapping feature, but that faded too, and a more recent launch of “replies” didn’t deliver much of a boost at all.

“As of July 5, Jelly ranks outside of the top 300 apps in the ‘Social Networking’ category and has not ranked in the top 1,000 overall apps since May 19,” reports CB Insights.

I hadn’t been on Jelly for a few months. As I wrote back in February, I just wasn’t seeing many questions that needed a photo to be asked. And if I was just asking where to take my kids on a rainy Saturday, why not just do that on Twitter or Facebook where there’s a much larger network to answer and a greater likelihood of receiving an immediate response? 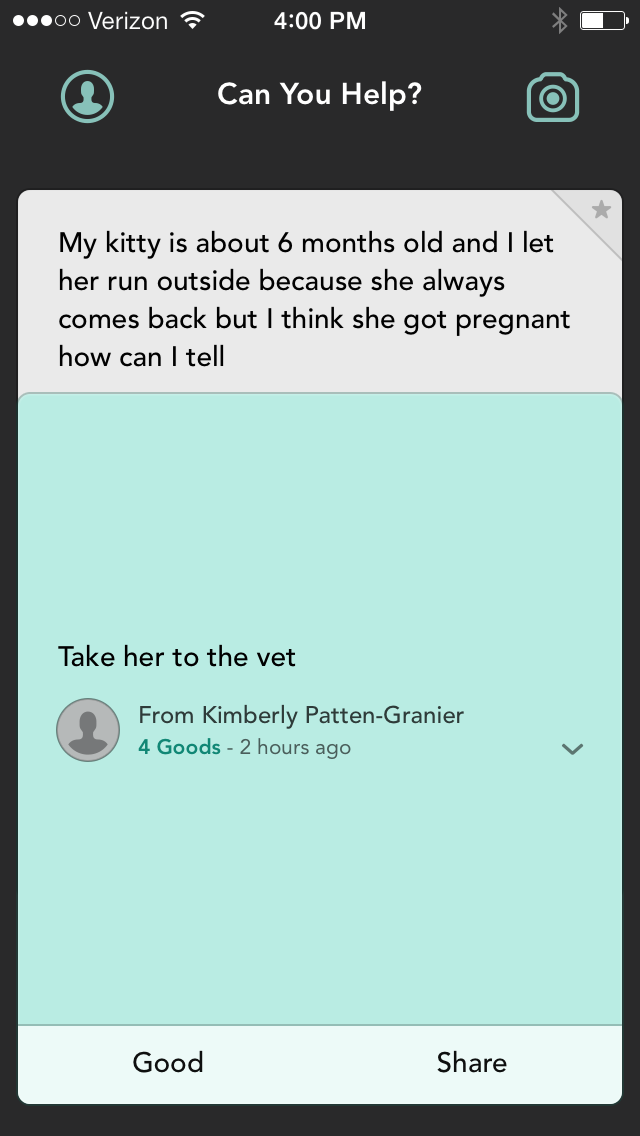 Put another way, the photos were supposed to be the twist. If the photos are superfluous, what’s Jelly’s reason to exist?

Biz Stone has shared increasingly bizarre answers to this question, like this one in Vanity Fair:

You know, technology companies always like to talk about Star Trek—like the future of search is Star Trek because on the Starship Enterprise you just talk into the computer and it understands you. And I’m like: You’re skipping over all the other part of Roddenberry’s thing! Where mankind had eliminated poverty, disease, hunger! You’re just skipping it! You can’t skip that!

What that means, as far as I could tell, is that Jelly would train in people a muscle memory “to help” that would make the entire world more empathetic of a place.

I decided to fire up Jelly for the first time in nearly six months to see if engagement levels had grown. Roughly half of the questions served to me had no answers, several had unhelpful ones, and I didn’t see any with more than a dozen or so answers. And a good quarter of them were asking me to identify a flower, tree, or bug.

Given Jelly’s deep Valley connections and that my social graph is heavily inclined towards tech early adopters, I was surprised at some of the questions that had few to no answers, as they should be squarely in that audience’s wheelhouse.

For instance, a question about the best San Francisco coffee shops for casual meetings only had three responses. Everyone I know using Jelly has an answer to that, they just (seemingly) don’t care.

A question about whether Jelly was useful had mixed results -- and again, people answering that question on Jelly should be handicapped towards saying yes.

And even questions directed at the Jelly team weren’t answered: 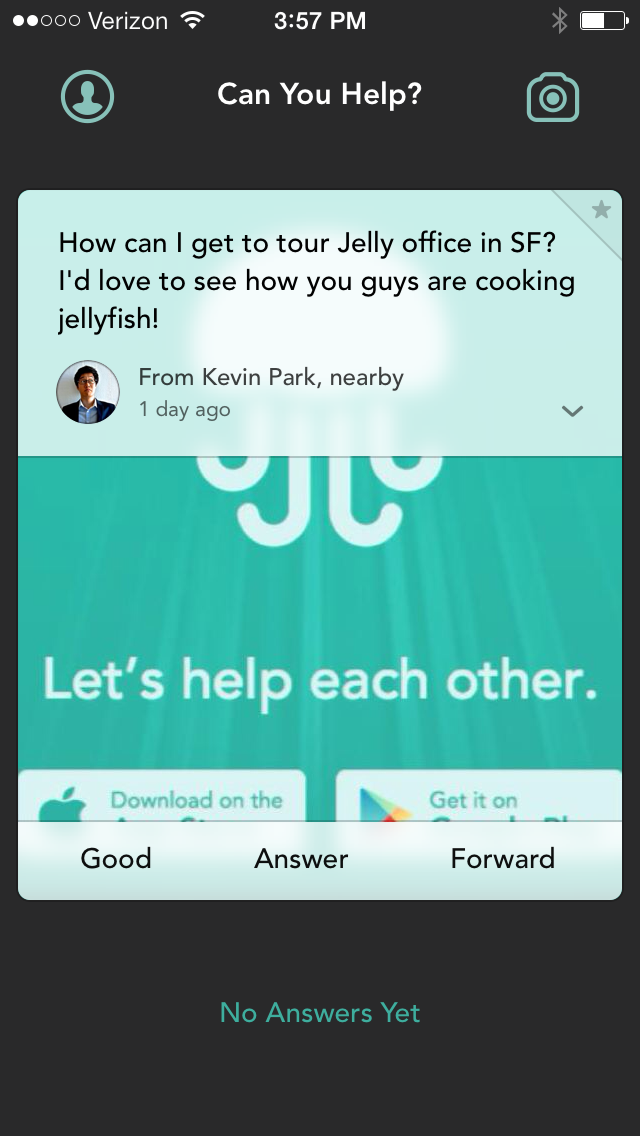 After about 20 minutes, Jelly dismissed me saying there were no more questions for me to answer. That’s it. Engagement force-quit. And goodbye again, Jelly.

It’s pretty. And I still think the idea was clever. But it’s just not working.

I went on Crunchbase looking for some insight into what had been written about Jelly of late. I found a strangely out of date Crunchbase page showing the wrong Evan Williams and zero funding, despite listing investors. Likewise, a Google News search under “Jelly” didn’t return a single frontpage result pertaining to the startup. It’s almost as if Jelly never launched.

Let’s remember the star studded investor base in Jelly: Greylock and Spark Capital’s Bijan Sabet. (Who I’m interviewing on stage tomorrow, as luck would have it.) And angels that include Al Gore and Bono. I mean, Jelly was a clever idea but none of that would have happened if it weren’t for Stone’s Twitter track record.

But Jelly has to be another bullet point in the growing debate in the Valley lately over whether or not it's really better to back serial entrepreneurs. After all, don’t we champion the young and naive kid in his early 20s because he “doesn’t know what he doesn’t know?” And the founder who stays CEO forever? Jeff Bezos, Larry Ellison, and Mark Zuckerberg aren’t serial entrepreneurs.

If a serial entrepreneur wasn’t successful ,he has baggage. If he was, he also has baggage. And if he’s been insanely successful, what motivates him? If he can keep funding his company himself, is he ever forced to listen to outside counsel? Does he have that same white-knuckle fear of “What if this doesn’t work?”

In the enterprise space, there’s definitely a strong correlation between past success and future success. There is a set playbook for building and scaling an enterprise company, which is the reason enterprise deals have been the unsexy workhorse of returns in venture capital, decade-after-decade.

When it comes to consumer, many people are starting to believe (or at least finally say aloud) that it’s just an unpredictable crap shoot. Recent methodology has shown that serial entrepreneurs in the consumer space tend to outperform first-timers only when they are doing something similar to what their first hit was.

You could argue that Evan Williams and Biz Stone both fit squarely in that description. Blogger and Twitter and Medium are all ultimately different platforms for easily creating and sharing content. Likewise, Twitter and Jelly both have a serendipitous element of connection through space and time around a real-time conversation or real-time need for information.

The two may share more in common with another repeat founder who keeps trying to solve the same problem: Dennis Crowley. While I respect and like Crowley a huge amount, and Foursquare has clearly gone further than his past efforts, it too is struggling.

None of this is to count out Foursquare, Jelly or Medium. The former is valuable to someone for a decent price, it may just not be the Facebook of New York that people were hoping for. And Jelly and Medium have time if the founders want them to have time.

But it reminds me of something I wrote last week about how truisms around what makes a great VC are seductive but ultimately disappointing: People are actually good at their jobs because of who they are not what they’ve done. 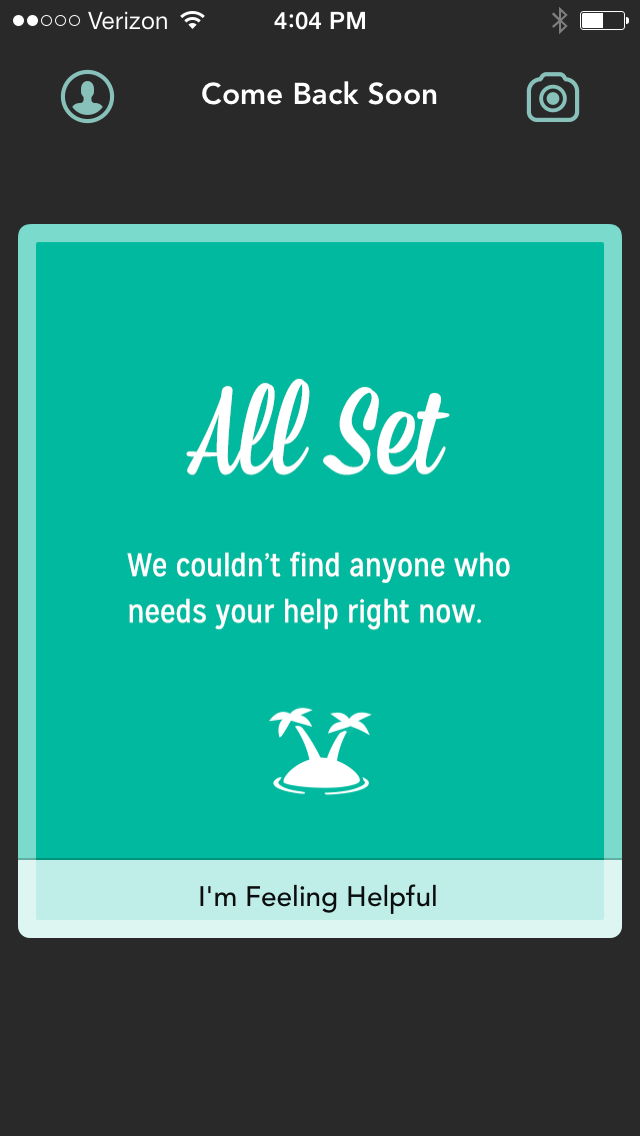