A look back at the first issues of Wired prompts the question: How far have we come?

As a newcomer to the field of digital journalism, I decided a few months back to get myself grounded in the form by ordering the first three issues of Wired, from way back in 1993.

The magazines are portal into a world that existed before the mass adoption of the internet, before Google, Yahoo!, Netscape, the iPod, Amazon, the smartphone and Mark Zuckerberg’s first zit. It was an age when advertisers still tried to convince a rational reader with paragraphs-long appeals. An era when Microsoft lorded over the virtual Olympus, when Steve Jobs was absorbed with turning dancing lamps into talking toys, and the future of telecommunications was a broad, dazzling horizon, a virtual New World.

Once my eyes adjusted to the intentionally disorienting graphic design, I tucked into the prose, and as I read I became increasingly disappointed in how far we’ve come, over these past 20 years.

Wired begins with a quote from Marshall McLuhan announcing that electronic technology will reshape the family, the workplace, the neighborhood, the government and the way humans relate, spread out over pages of psychedelic collage layouts. 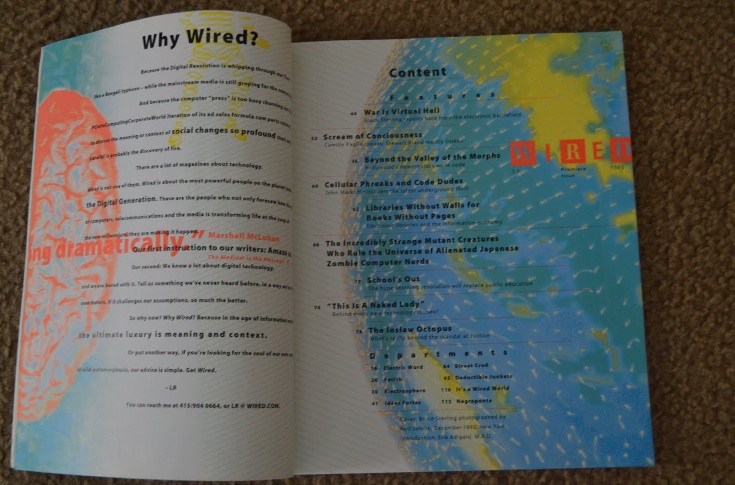 This is followed by a short essay from Wired’s founder Louis Rossetto, stating the magazine’s mission to “discuss the meaning or context of social changes so profound their only parallel is probably the discovery of fire.” Rossetto writes that Wired takes as its subject “the most powerful people on the planet today – the Digital Generation...who not only foresaw how the merger of computers, telecommunications and the media is transforming life at the cusp of the new millenium, they are making it happen.” Rossetto tells readers to look to his magazine to find “the soul of our new society in wild metamorphosis.”

It’s heady, ambitious stuff. It would be too easy to pick apart the bold predictions of 20 years ago and mock them for them for their naivete or wrongheadedness. While there are few funny-in-hindsight fortunes swirling in this timestuck crystal ball, what is most striking is the extent to which the prophecies Wired made back in 1993 are the same ones we hear now, with the bold edges filed down considerably. 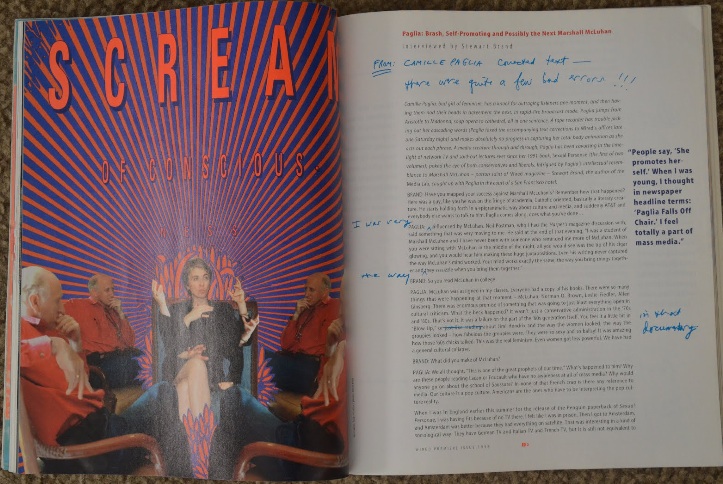 The first issue features the efforts of Apple investor Mike Markkula’s company Echelon to bring to market “index card sized”, sensor-laden computer boards to automate the home, track the vital signs of pets and livestock, and revolutionize the factory floor. While Echelon (which shares its name with a secret NSA signals intelligence collection program that scandalized the incipient web in the late 80’s) still exists, it is mostly a provider of hardware for smart energy grids. Meanwhile, the consumer-facing potential of the Internet of Things is a constant source of buzz in 2014.

This case is repeated throughout the early editions. Slight tweaks to circa-1993 visions persist as the fodder for today’s sprawling tech media.

Also from the first edition: quantum computing, ebooks, smart watches (albeit only as smart as a pager), online education that promises to disrupt the traditional model, virtual reality gaming, the San Francisco Board of Supervisors embracing the “multimedia industry” with resulting real estate increases and fancy coffee shops, dildonics, interactive airplane seat-back displays, drones, trolls, and an (ill-fated) movie project about a “a major nerd who can’t quite make relationships work” called “Silicon Valley Story” – with Timothy Leary cast as an enigmatic venture capitalist.

Today it’s taken for granted that the Internet has profoundly changed and shaped our lives and will continue to do so. But as I write this on my Apple laptop (subject of a two-page ad on page four of the premier issue), consulting notes from my smartphone (subject of a gadget review on page 27), I find myself questioning how far we’ve really come in the past twenty years.

Without a doubt, the work of the first “Digital Generation” has been a driving force in the American business landscape, has revolutionized the way we avoid eye-contact on public transit, find roommates, shop, find dates, find answers to nagging questions, choose restaurants, watch video...I don’t think I need to go on.  But have we changed, fundamentally? And to the extent that we have, are we better off for it? 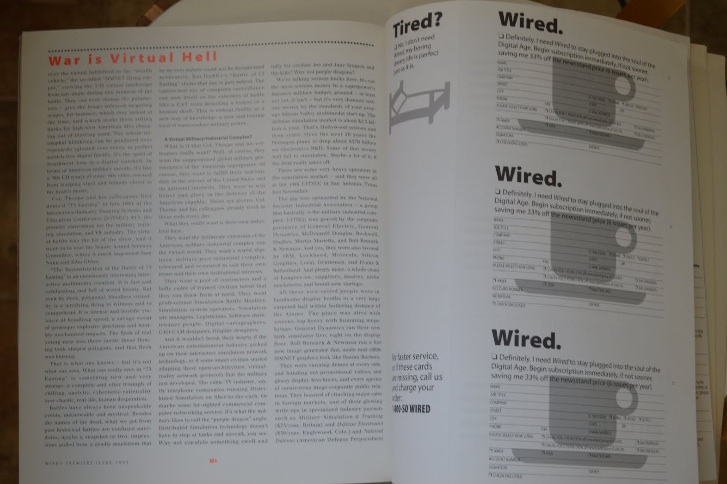 Before I went to work at Pando, I was a high school teacher. My students were all younger than the magazine open on my coffee table. They aren’t just internet natives, they’re Facebook natives, Youtube natives. They have a culture that older generations will find inscrutable – tweeting to thousands of followers during class, sharing their Japanese-inflected art on forums, spending sleepless nights playing videogames in clans with global membership, wearing t-shirts bearing the handles of Vine auteurs. Worldstarhiphop. Creepy Pasta. This.

Still, the high school experience hasn’t changed much, alarmist reports of a pharmaceutically addled generation without attention spans and national anti-bullying campaigns notwithstanding. In my experience, kids are still just kids.

And business is still just business, despite the oft-impugned claims of a new elite class of tech-executives to do good and make the world a better place. The Silicon Valley start-up and investment world has grown remarkably in scale, but it has the same basic structure. All in all, this New World looks a lot like the old one, with new gadgets and a new cohort of power players.

Maybe its wrong to assume that 20 years would be enough time for these fundamental changes to take place. Maybe the changes inherent in the technologies we are using are just waiting for the slow meat of humanity to catch up.

The most disappointing thing, to me, on reading the first issues of Wired is the change that’s taken place in the way we talk about technology and its repercussions. Sure the early Wired was an ad-based media company bent on becoming a global brand, ingeniously packaging itself as the voice of a rising generation. In that, it’s not totally dissimilar to MTV’s courting of Gen-X or the marketing moxie of “the Pepsi Generation.”

But it had something going for it that reached beyond hyping an industry, its products and its stars.  In these early pages, Wired gives equal weight to founders and “thinkers”. Today we seem all to happy to conflate the two. Sergey, Larry, Elon, Mark, Bill, Jeff, Sir Richard... these are our intellectuals as well as our magnates, and, business being so good, we seem content to afford them the full benefit of both roles.

Which, leads us to an uncomfortable situation. We’re so impressed by all the money these guys (and as has been noted, they are almost entirely guys) have made and the world they promise us, that as they shape the world to fit their sci-fi fantasies we continue to enrich them and go along for the ride. There’s enough hot air in your typical 2014 fireside chat to launch vast armada’s of connectivity ‘Loons, but very little critical ballast to keep things grounded.

If an example is even necessary, here's Zuck last week in an Op-Ed for the Wall Street Journal:

"Perhaps the most important change might be a new global sense of community. Today we can only hear the voices and witness the imaginations of one-third of the world's people. We are all being robbed of the creativity and potential of the two-thirds of the world not yet online. Tomorrow, if we succeed, the Internet will truly represent everyone."

It's hard to overlook the fact that if these bold predictions come true, with or without the help of Zuckerberg's non-profit Internet.org, the man making the predictions will be greatly enriched. It's both problematic and typical that the assumption that people can't reach their creative potential without an internet connection goes unchallenged.

Rossetto closes his introduction to the first Wired with this statement: “...in the age of information overload, the ultimate luxury is meaning and context.” Despite the incredible wealth and change the internet has so far wrought, I’d argue that in these terms we are looking more and more like a subsistence society.