Over the past two weeks, Pando's Mark Ames has written a series of articles exposing the repugnant past of Reason magazine.

The timing was appropriate: Reason — the house magazine of American libertarianism — recently backed the "Reboot" conference in San Francisco, an event designed to win more Silicon Valley folks over to the libertarian cause. As Mark explained, by downplaying the movement's racist history and up-playing its pro-disruption, anti-government side, Libertarianism has attracted growing support in a city where the past is, at best, an irrelevance and, at worst, something to be actively ignored.

Mark's pieces revealed that many of the figures who still loom large over American libertarianism — including those funding and promoting the Reboot conference — had previously either written, edited, or published articles supporting apartheid in South Africa, and denying the Holocaust.

Mark's second article, exposing Reason's 1976 "special issue" about historical revisionism, was particularly shocking. As Mark wrote, the contributors to that issue comprised what a leading Holocaust historian described to Pando as "a who's who of early American Holocaust denial."

The public reaction has been a mix of disgust, condemnation and shock. Thousands of readers have shared the story on Twitter and Facebook, and it has even prompted scholarly discussion from the Society For US Intellectual History; Salon's Andrew Leonard summed up the stunned reaction of many contemporary readers of Reason with commendable understatement:

"I had no idea that Reason Magazine was once a haven for Holocaust Revisionism. Holy Moly."

The response from Reason's editors has been one of shock and outrage too. The only difference is that they're not outraged by the contents of their own magazine's archives, but rather at Mark Ames and Pando for exposing them.

First, Reason’s Editor in Chief Matt Welch responded to Mark's piece about the magazine's support for apartheid by calling him a conspiracy theorist and accusing Pando of being "reckless" for publishing his thoroughly researched and fact-checked piece, with all of the evidence placed online for readers to see for themselves. (One has to wonder how Welch gets any work done if he has to write 3300 word responses to every "conspiracy theorist.")

Then, yesterday afternoon, it was the turn of Reason.com editor Nick Gillespie to respond, this time to Mark's second piece regarding the magazine's "who's who of holocaust denial" issue. Given Gillespie admits he hadn't seen the issue until Pando drew his attention to it, you might expect his response on behalf of Reason to take the form of a mea culpa: we're deeply sorry Reason denied the holocaust in the 1970s, and that several of the people involved in the magazine are still board members and officers in the Reason Foundation — Reason magazine's publisher — to this day.

But that's not how Gillespie responded. Rather -- and writing this sentence, I'm hit with a second wave of nausea -- he denied that the magazine had denied the holocaust...

The “revisionism” under discussion in the 1976 special issue refers to the movement that was popular especially among left-wing critics of the Cold War such as University of Wisconsin’s William Appleman Williams. Rather than accepting the United States’ self-justifying explanations for the wars it fought and the domestic policies it pursued, revisionists typically focused on less noble motives in ways that they believed illuminated uncomfortable truths.

But, Gillespie grudgingly admits, there were a whole bunch of holocaust deniers in the issue....

Ames is correct that some of the contributors to that issue developed an interest in or were fellow travelers with that most pathetic area of study known as Holocaust revisionism or denialism. That scurrilous topic is not the focus of any of the articles in the issue, but the inclusion of contributors such as James J. Martin, who would go on to join the editorial board of the contemptible denialist outfit the Institute of Historical Review, is embarrassing. Another of that issue's contributors, Gary North, would later be excoriated in this 1998 Reason article for arguing in favor of violent theocracy and the stoning of gays and others.

Note Gillespie's clever use of the word "focus" -- holocaust denial wasn't the "focus of any of the articles in the issue." Gillespie wants us to believe that, yes, the issue does indeed feature a who's who of holocaust deniers -- but they were actually writing about other issues, not the holocaust or Nazis.

Unfortunately Gillespie's statement is flatly untrue.  As Mark demonstrated in his piece (including highlighted scans of the relevant pages), the issue was chock-full of explicitly holocaust denial. Here's a scan from North's article in the issue: 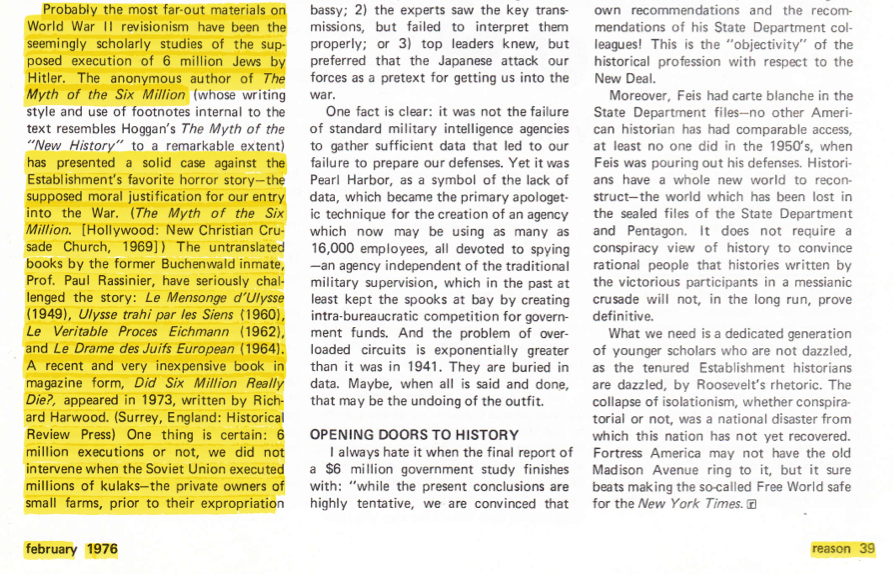 North's holocaust denial in the February 1976 issue could not be more clear:

Probably the most far-out materials on World War II revisionism have been the seemingly endless scholarly studies of the supposed execution of 6 million Jews by Hitler. The anonymous author [Hoggan] of ‘The Myth of the Six Million’ has presented a solid case against the Establishment’s favorite horror story—the supposed moral justification for our entry into the war.

Another contributor to the issue was Austin J. App, who Mark described as...

..the author of  “Six Million Swindle,” and “A Straight Look at the Third Reich: Hitler and National Socialism: How Right? How Wrong?” in which he mocked “the legend of the six million Jews ‘gassed’” while praising Hitler as “a man of architecture and art, not of armaments and war.”

When he wrote for Reason, Austin App also served on the board of trustees of the neo-Nazi National Youth Alliance, which later morphed into the more violent neo-Nazi National Alliance, which the Southern Poverty Law Center describes as “the most dangerous and best organized neo-Nazi formation in America.” For some reason, Gillespie completely leaves App's name out of his response. Perhaps because App's contribution to the the February 1976 issue was a piece entitled "The Sudeten-German Tragedy" in which he describes the postwar expulsion of ethnic Germans from Czech borderlands after the fall of Nazi Germany as “one of the worst mass atrocities in history.” The Munich Pact that allowed Nazi Germany annex chunks of Czechoslovakia is described in that same article as “belated justice.” Yet for App, the Holocaust of the Jews was a "Talmudist swindle" to "blackmail Germany." 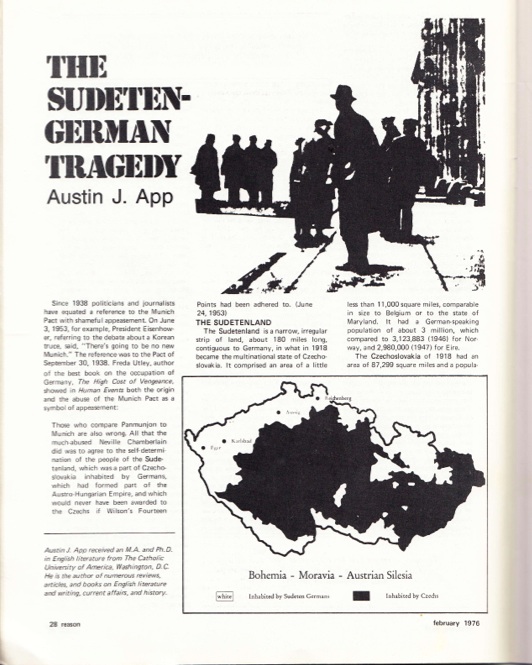 Gillespie also ignores Mark's discussion of the Reason issue immediately preceding the February 1976 issue, which trailed the upcoming revisionist special. That issue featured an interview with James J Martin, one of the major contributors to the revisionism issue.

REASON: Dr. Martin, do you believe (1) that the specific charge against the Nazis of having a mass extermination program of several million Jews is true, and (2) that the Allied atrocities were as great or greater than those of the Germans, from your study of the question?

MARTIN: Well, I never made a head count of all who lost their lives in the War—we’ve seen a wide variety of statistical materials, some of which have been pulled out of thin air… I don’t believe that the evidence of a planned extermination of the entire Jewish population of Europe is holding up. [...] The German concentration camps weren’t health centers, but they appear to have been far smaller and much less lethal than the Russian ones. I could go on, but I'd essentially just be republishing Mark's excellent article. All of the above quotes, and many more taken straight from the February 1976 issue, are right there on the page, and there's an embed of the full issue at the end. For Gillespie to pretend those articles simply don't exist requires intellectual dishonesty -- and gross insensitivity -- of a kind rarely seen in modern American letters.

But Gillespie isn't satisfied with wishing away his magazine's past. In a naked attempt to rally readers in his magazine's defense, he also tries to frame Mark's article -- and Pando generally -- as part of a grand conspiracy by the left, and the right, to discredit libertarianism.

I wish I were kidding...

However ridiculous such attacks may be, they are a sign that broadly libertarian ideas about fiscal responsibility and social tolerance are gaining ground in all areas of politics and culture. Indeed, as Ames frets, libertarianism is even making “major inroads into the disaffected left.”

As the conservative right and progressive left feel threatened by libertarianism, such attacks will multiply in number and intensify in venom. The main purpose is not to actually engage libertarian ideas—including once pie-in-the-sky beliefs that governments should be financially sustainable, gay people should be allowed to marry one another, and that more immigration is better than less immigration—but precisely to avoid discussing their merits.

...I realize that not everyone will agree with those goals or our positions on everything (those on the right tend to recoil from our pro-choice position on abortion just as those on the left tend to hate our pro-choice position [sic] on school choice).... Our 46-year history of promoting freedom has already done and will continue to do a hell of a lot more to improve humanity than the radical left or right, and certainly than the Mark Ameses of the world can ever dream of doing. Gillespie seriously wants his readers to believe that Pando is only repulsed by Reason's denial of the holocaust because we fear.... gay marriage, abortion and immigration?

Speaking as Mark's editor -- and as a British immigrant, living in San Francisco, who is firmly pro-choice on both abortion and schools -- that charge will have a tough time sticking, as will the idea that Pando is unwilling to engage libertarian ideas.  In fact, it's precisely our willingness to engage libertarianism's actual ideas, and to frankly discuss the movement's past -- as opposed to its current t-shirt slogans -- that has has Gillespie and his colleagues freaking out.

Reason, on the other hand seems to be more than happy to engage in smears as a way to avoid uncomfortable truths.

Those smears began with trying to dismiss Mark as a conspiracy theorist, and they continued with trying to portray anyone who questions Reason magazine as an anti-choice homophobe (unlike, say, the anti-choice homophobe who stood alongside Reason.com's editor, Nick Gillespie, on stage at Reboot). In the comments on Gillespie's response, the tone is even more unpleasant: "I'm waiting for Mark Ames to get his teeth kicked in," writes one Reason reader.

I have no doubt that those smears and threats will only multiply as the outrage over Reason's past, and their ongoing denial of it, continues to reverberate across the blogosphere, and into mainstream media. But, no matter how ugly the attacks get, our reporting into Silicon Valley's fastest growing -- and least understood -- political movement will continue.

After all, by Nick Gillespie's own reasoning, all those smears and angry responses from Reason mean we must be on the right track.