This time last month, I wrote about an incredible interview between Julian Assange and Democracy Now’s Amy Goodman, in which Assange ripped into eBay founder and Intercept publisher Pierre Omidyar.

As I pointed out at the time, the tirade appeared to draw heavily on Pando's reporting on Omidyar and the Intercept...

Assange: "…unfortunately, First Look is not just Glenn. First Look is actually the big power. All the money and organization comes from Pierre Omidyar. And Pierre Omidyar is one of the founders—is the founder of eBay and owns PayPal and goes to the White House several times each year, has extensive connections with Soros, and can broadly be described as an extreme liberal centrist. So, he has quite a different view about what journalism entails. For example, he has said this year, and also in 2009, that if someone gave him a leak from a commercial organization, not from the government, then he would feel it was his duty to tell the police. So that’s a very different type of journalism standard that comes from Pierre Omidyar. And unfortunately, some of that, or perhaps a significant amount of it, has gone into First Look and created some constraints there.

And that was seen most—seen most disturbingly when First Look knew from the Edward Snowden documents that all of Afghanistan was having its telephone calls recorded. " Today comes evidence of how Pando's coverage has also influenced Assange's worldview when it comes to Silicon Valley's ties to the military and intelligence industries.

In his upcoming book, When Google Met Wikileaks, Assange offers an edited transcript of his conversations with Google chairman Eric Schmidt while Assange was under house arrest at Ellingham Hall in the UK.

In the book, Assange cites several of Yasha Levine's Surveillance Valley investigations, and writes that "my discussion of [the ties between Google and the military/intelligence industry] draws on Levine's research."

In particular he cites "Oakland emails give another glimpse into the Google-Military-Surveillance Complex” and “Emails showing Google’s closeness with the NSA Director really aren’t that surprising.” 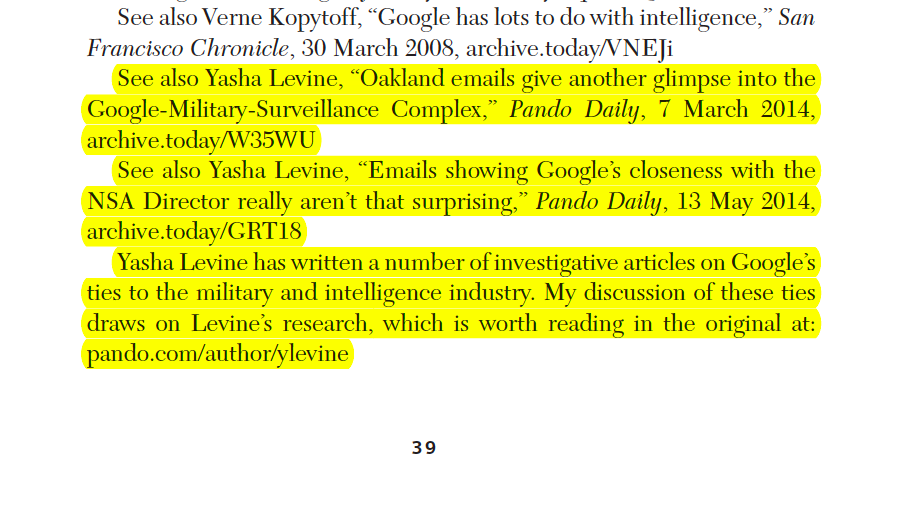 I've had my differences with Assange (although less so recently), but it's encouraging to know that Pando's reporting on these serious issues is being read by people on all sides of the debate, from the meeting rooms of Washington DC, to the boardrooms of Silicon Valley, to the bedrooms of the Ecuadorian Embassy in London.

If you haven't read Yasha's brilliant Surveillance Valley coverage yet, why not follow Assange's lead and start here?