Uber urges CA riders to oppose ridesharing bill, neglects to tell them what bill actually does

Who would have thought California, the cradle for American innovation, would take the lead in killing it. Governor Brown is committed to leading California into the future, but some in the legislature are anonymously doing the bidding of trial lawyers, big taxi and insurance lobbyists. Their bill, AB 2293, will be voted on THIS WEEK and would kill ridesharing in the Golden State.

A bill to kill ridesharing! What are lawmakers thinking?! That's terrible!

If you want to keep uberX in California, now is the time to act. You are voting with your wallets every day - choosing Uber for a safe, reliable ride. Call your senators and tell them to stand up for Uber, your transportation options and the state’s future – not special interests. #CAlovesUber

At this point, no doubt, many Uber riders will be reaching for their phones. Save Uber! They'll be shouting. Helpfully, Uber provides a list of senators to call... 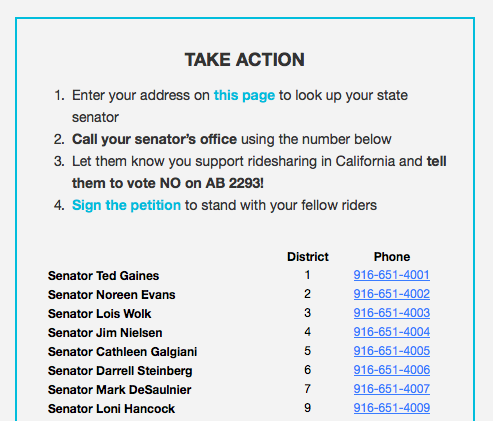 Meanwhile, the more sharp eyed riders might have spotted that at no point in the email does Uber explain what AB 2293 actually does. And that's likely for good reason: Because if they did then that "safe, reliable ride" line might start to seem a little ironic.

Assembly Bill 2293, which passed a 7-0 vote in the state Senate Energy, Utilities and Communications Committee and a 71-0 vote in the California State Assembly seeks to ensure that ridesharing drivers are fully insured whenever they're logged on to a ridesharing platform, even if they don't have a passenger in their car.

The bill would put much of that burden on the ridesharing companies themselves, and comes after Uber denied it was responsible for the death of a child killed by an Uber driver while he was apparently waiting for a new fare.

By using vague, but scary, language around "trial lawyers, big taxi and insurance lobbyists" trying to "kill" ridesharing rather than simply giving riders the facts, Uber comes across less as a company trying to rally its customers and more like a politician using an attack ad against its opponent. Which, of course, is exactly what Uber's Travis Kalanick said he was planning to do.

Good to see that David Plouffe's new gig as Uber's "campaign manager" is getting off to a good, honest start.