Way to go, racists! As I reported yesterday, a GoFundMe campaign to raise money for Officer Darren Wilson, the cop who shot Ferguson teen Michael Brown, had already passed $145k in donations. Many of the donations were accompanied by racist slurs and attacks on Brown... 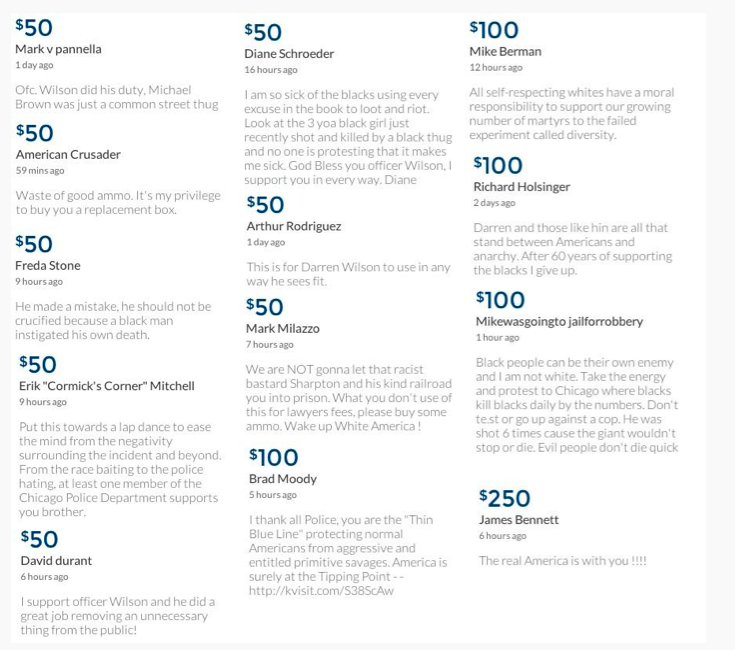 Earlier today, the campaign ended after breezing past its $250k fundraising target. That's $50k more than the reported total raised by Trayvon Martin killer, George Zimmerman. Shortly afterwards, Shield of Hope, the group behind the campaign set up a new campaign which has so far raised over $17k.

When contacted for comment by Pando, yesterday, GoFundMe sent a short statement, saying they wouldn't be removing the campaign but were deleting comments which breached their terms of service.

In response to the high volume of recent inquiries, facts pertaining to the ‘Officer Darren Wilson’ fundraising campaign on GoFundMe are being shared below:

- The campaign remains live at the following URL: http://www.gofundme.com/SupportOfficerWilson

Due to the high volume of media inquiries, we won’t be able to respond to all of your questions individually. Thank you.