I’ve said it before and I’ll say it again: Uber versus Lyft is the most interesting rivalry in tech today.

Both companies are insanely well-capitalized and both have delivered significant innovation to the marketplace. But unlike some more established players, (i.e. Apple versus Samsung, or Facebook versus Twitter) there’s still a degree of uncertainty about how this market will play out. Not only are there questions about how Uber and Lyft will compete amongst themselves for drivers, riders, and investors, but also how the two will fare in competition with the traditional taxi and limousine market and in battle with regulators.

Unfortunately, like most private companies, both Uber and Lyft share very little actual data that would allow us to determine a relative winner (or leader) in this race. Sure there are anecdotal clues, Uber has been around longer, is in more markets, and seems slightly more popular, but by how much? And yes, Uber has raised nearly five-times as much, but is that a viable measuring stick?

Fortunately, there may be more data available to use in this analysis than previously thought. FutureAdvisor, a San Francisco-based financial advisory firm, has partnered with an unnamed financial services data partner to gain access to the anonymized credit and debit card spending data of a meaningful sample of people. Of 3.8 million consumers included in this study, 96,000 (2.5 percent) used at least one of the two ride-sharing services in the 12 months ending in May 2014. In total, more than 1.4 million individual rides were observed in this data set. While it’s not an exhaustive look at the two businesses, this is a meaningful sample size and can be used to draw instructive conclusions about the relative popularity and growth of the two services.

FutureAdvisor reports that Uber’s revenue was 12-times that of Lyft’s among this sample, with consumers spending $26.4 million on Uber and just $2.2 million on Lyft. Not only did Uber provide seven-times as many rides as Lyft, 1.23 million rides to 170,000 within this sample, but its average fare was 1.6 times that of Lyft’s, beating it $21 to $13. This could either mean that Uber is more expensive than Lyft, that its premium tier Uber Black and Uber SUV services were a popular choice among this data set and thus skewed the data, or that Uber riders tend to use the service for longer trips than do Lyft’s.

The bad news for Lyft, and its investors, is that not only is Uber bigger today – something that might be otherwise written off as a consequence of its head start and larger budget – but the service is growing faster, on an absolute basis as well. According to FutureAdvisor, Uber is adding new customers at a rate five-times that of Lyft, seeing rides delivered grow at a rate six-times faster, and seeing revenue increase at a rate tenfold that of its mustachioed rival. Within FutureAdvisor’s pool of 3.8 million consumers, Uber added between 6,200 and 7,300 new riders per month during the observation period, while Lyft added between 1,100 and 1,500. Due to its smaller size, however, Lyft is growing faster on a relative basis than its more-established rival. 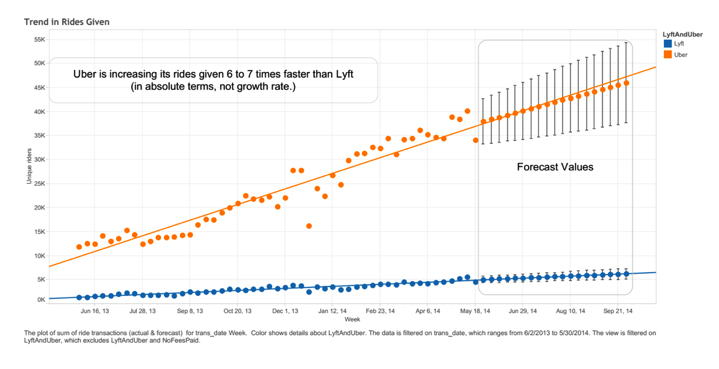 Another interesting, but not altogether surprising takeaway from FutureAdvisor’s analysis is that growth in the US market appears to be slowing for both services, suggesting an approaching saturation of on-demand transportation demand. Compared to June of last year, when the services grew total riders at a combined rate of 25 percent per month, that rate was just 10 percent in June of this year.

It’s not just the growth rates of the two services that become evident when viewing this data, but also their stickiness. According to FutureAdvisor, if either company can get a rider to use their service in two of the first four months after signing up, there’s an 80 percent chance that they will become a long-term customer. Customers appear to be more loyal than media reports of ongoing price-wars would suggest, as only 2.5 percent of all consumers studied used both Uber and Lyft during the observation period. In that sense, the fact that the companies are competing far more heavily for drivers, rather than marketing to new consumers, makes a bit more sense.

To reiterate, the above data represents just a brief glimpse into the fierce and ongoing battle between Uber and Lyft for the crown of champion in this Future of Transportation battle royale. There are unknown factors that could potentially skew this data one way or another, such as the geographic distribution of the consumers studied (Uber and Lyft are established to different degrees in different markets) and the socioeconomic status of the consumers (Uber has a premium tier that Lyft cannot match, but both are well represented in the economy tier). The data is also limited to the US market and only extends through May of this year, so the international picture (where Uber dominates) and the last three months are not represented.

But given the otherwise limited insight we have into the actual performance of these two companies, this data represents a fascinating and instructive look. The takeaway, that Uber is far larger than Lyft, may not be surprising in its direction but is certainly so in its degree.

Then again, maybe it shouldn’t be so surprising given that some very smart financial minds with access to more data than this just put a whopping $1.2 billion into Uber’s Series D round earlier this summer. People love nothing more than betting big on a winner.

Despite the above data, this race is far from over. Both companies have heaps of venture capital at their disposal and access to more should they need it. And with a never-ending stream of headlines, controversies, lawsuits, driver protests, and other incidents re-shaping the narrative around this market on seemingly daily basis, it’s possible that this picture could look very different a year from now. I for one will be watching, fascinated as the "Art of War"-like battle rages on.

Update 9/11/2014, 11:30am: A Lyft spokesperson provided the following comment after the publication of this article:

We were told this report is based on a website dataset that has Lyft gaining market share and growing faster than the competition. However, the data from this sample set does not track our actual growth which, as an example, this past May was 40% MOM not the reported 10%. Since May, we have doubled the number of cities we are in including New York City, Miami and Austin.