“We the people want our money safer than our selfies." PayPal goes after Apple in a full page NYT ad

As the rumors of an Apple payments platform swirled leading up to last week’s keynote, plenty of smart people asked whether the world’s most valuable company was about to kill eBay’s generation one online payments subsidiary PayPal. When the details of the Pay (Apple Pay) product emerged, those cries only grew louder, including here on Pando (although I'd argue we’ve taken a more measured perspective than most on this mounting competition).

But while Apple Pay surely has PayPal’s attention, the more established payments company hardly seems intimidated by the new market entrant. The first shot across the bow came from PayPal Sr. Director of Communication Rob Skinner speaking to TechRadar following the announcement, who said, "Nobody can dispute Apple's strong track record, but payments is a difficult area. It's much more difficult to do payments than to keep a live stream working!"

Ouch. The dig was in reference to Apple’s widely panned difficulties in streaming its keynote to an eager worldwide audience (a difficult task given the enormous demand for that content). A day later, Bill Ready, CEO of PayPal subsidiary Braintree and leading internal candidate to be PayPal’s next CEO, told Pando that Braintree won’t suffer any ill-effects should its merchant partners like Uber choose to adopt Apple Pay.

But, these were just warmup acts. PayPal broke out the big guns today with a full-page ad on the back page of the business section of the New York Times. Referencing the recent celebrity nudes scandal that many attribute to weaknesses in Apple’s iCloud security, the PayPal ad reads (full ad below):

“We the people want our money safer than our selfies. PayPal, protecting the people economy.”

Never mind that PayPal has had its own vulnerabilities exposed, and its parent eBay has seen its network breached in recent months, all while Apple has argued that its system was never breached as part of the celebrity photo hack, pointing to social engineering hacks as the attack vector. This ad is an opportunistic and masterful example of reframing the narrative in a hotly contested and very public battle for online payments supremacy.

The fact that Apple is commanding this much attention from PayPal and financial and business media alike before its product even enters the market is both unsurprising and impressive. PayPal is right to take the challenge from the well-heeled consumer electronics giant seriously, but at the same time deserves praise for not being afraid to throw a few haymakers of its own in the process. (PayPal declined to comment on its marketing strategy for this article.)

It will be several quarters before we know how the Apple Pay versus PayPal battle shakes out – in part because Apple needs to sell a meaningful number of iPhone 6 and Watch units to compete with PayPal’s installed base of approximately 50 million US consumers, not to mention push NFC adoption across the merchant ecosystem.

In the meantime, let’s hope that both companies continue to ratchet up the heat coming out of their marketing and communications departments. Despite being the new entrant to the category, Apple is by far the larger company overall and thus will almost certainly view naming PayPal directly in ads as beneath it. But the company showed no qualms over leaving PayPal off a list of preferred payment platform partners, while naming its arch rivals Stripe, Authorize.net, and Chase Paymentech.

Payments has long been viewed as a zero sum game meaning that for one company to win in this category, the others have to lose. It’s more complicated in this case as Apple Pay and PayPal overlap only partially in their functionality and target markets. But we should expect more fireworks to come as the two powerful companies continue to carve out their place in the next generation payments landscape. In the end, the increased competition should benefit both consumers and merchants by driving innovation and leading to lower fees. In the short term, let's hope it produces a few more laughs as well. 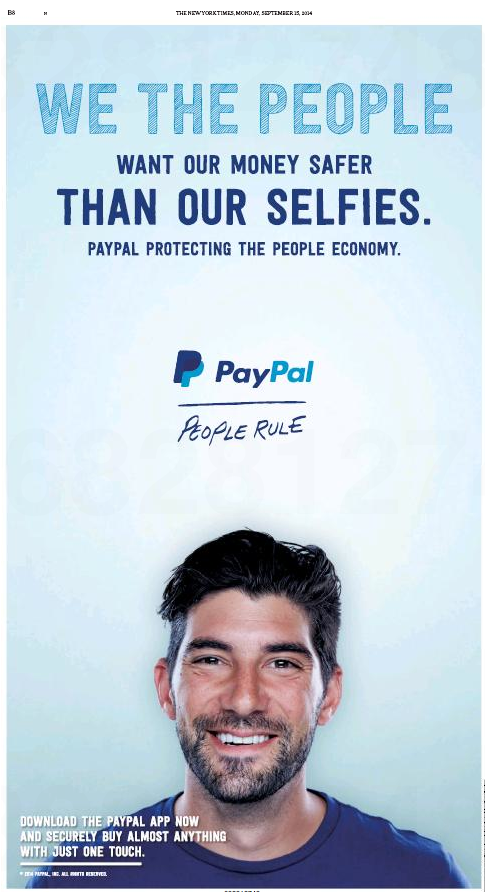