The hottest ticket in LA last night wasn't to President Obama's $34,000 per plate dinner at Gwyneth Paltrow's house. It was to Elon Musk's sold out unveiling of the "D," a mysterious upgrade to his already popular Model S sedan.  The event was held in a tented space along the Hawthorne Airport runway that looked better suited to a private concert or a Hollywood awards ceremony, complete with velvet ropes, a red carpet, a step and repeat wall, spot lights, and center stage, backed by a massive screen.

All told, there were several thousand people in attendance, including members of the media, current Tesla owners, company shareholders, and invited guests, all of which gathered to get an early glimpse at Musk’s latest innovation. Musk teased the event earlier this week – in very Steve Jobs-esque fashion, it must be said – offering a cryptic hint that he would soon be “unveiling the “D” and “something else.” (Can you say, “One more thing?”) The "D," it soon became clear, stands for Dual-Motor. The something else ended up being “the A,” which, Musk’s mildly sexually suggestive shorthand aside, signifies “Autopilot” or assisted-driving technology. 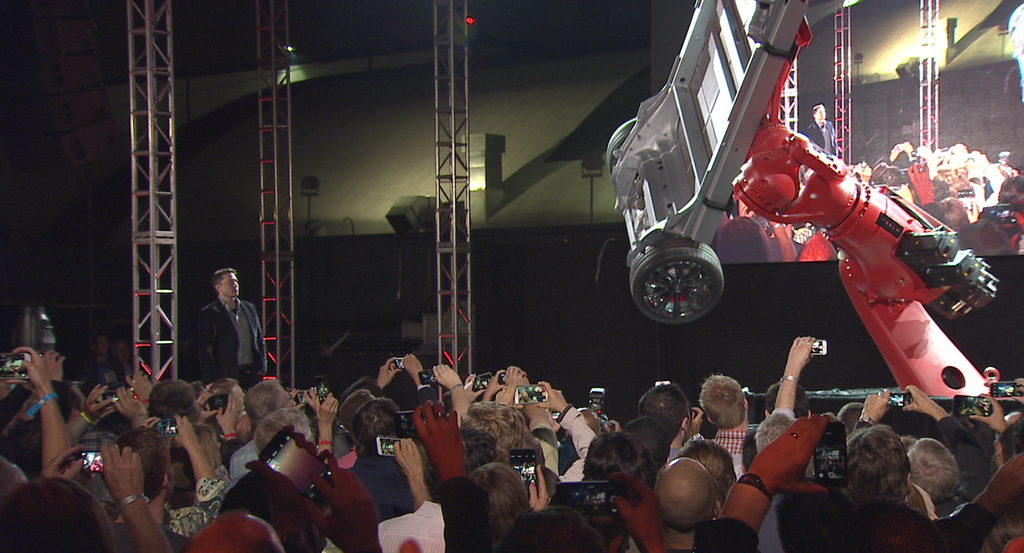 Shortly after Musk took the stage to tell the gathered audience of the dual-engine, all-wheel drive (AWD), Model S upgrade, he revealed the vehicle in grand fashion by lifting a full chassis, drivetrain, and wheel mount high above the stage using a massive robotic arm. Suspended in air, the D rotated in front of an awestruck audience, receiving cheers and applause as Musk described how the vehicle would better its Model S predecessors in nearly every performance capacity: faster acceleration, faster top speed, better handling, and (slightly) longer range.

The acceleration was what caught the audience’s attention, as musk compared the 0-60mph in 3.2 seconds D to "taking off from a carrier jet” and “having your own personal roller coaster.” He added that the company’s performance target during the design process was the 2.7 second McClaren F1, which is among the world’s fastest supercars. But, despite putting up gaudy numbers that make the P85D the fastest production sedan in the world, it's hardly a supercar, at least in the classic sense. It’s a family cruiser, with some remarkable performance chops hidden beneath the hood(s).

The fully-electronic AWD also merits discussion. Because the new D features two engines, the existing P85, 85, or 60 engine powering the rear wheels, and a separate 60 engine powering the front, the vehicle can dynamically shift power between the wheels at “millisecond speed,” Musk says, making it far higher performance than any existing mechanical AWD system. This will help anyone living in winter climate regions, and will also make it that much safer to test out the vehicle’s Mach-1 acceleration.

The futuristic assisted-driving features may have taken the audience more time to absorb and appreciate, but they are arguably a greater feat of engineering innovation. Fitted with additional sensors and software intelligence, all new Model S sedans, including the base model 60, performance model P85, and newly announced P85D, will offer what Musk described as “sonar” that “wraps the vehicle in a 16ft protective cocoon.” 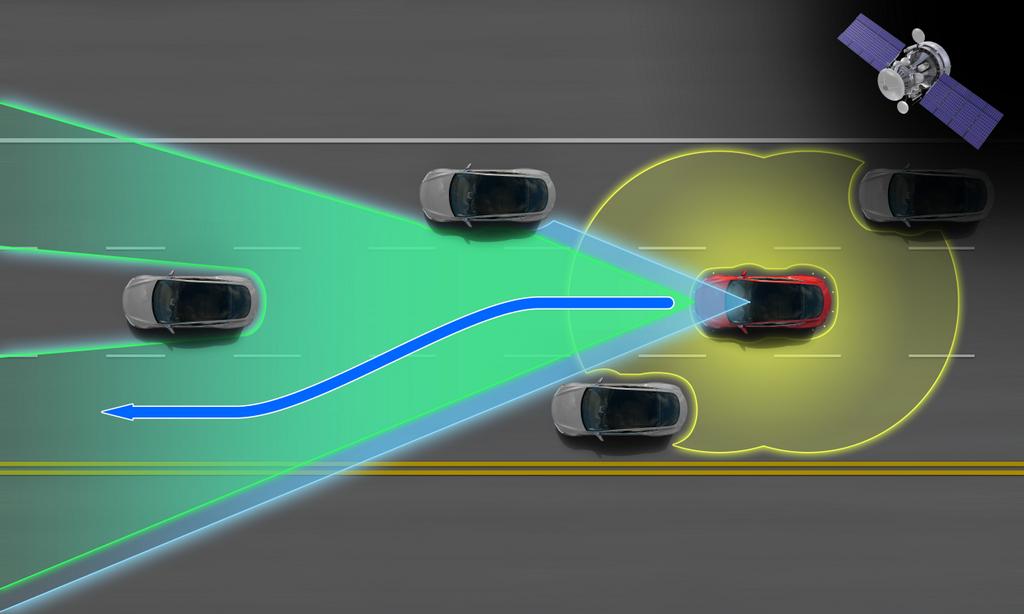 Tesla isn’t yet offering the type of fully-autonomous driving that Google and other companies have demonstrated in prototype form, with Musk explaining “It’s not at the level where you can fall asleep while driving and safely arrive at destination.” But the New Model Ss, and surely Tesla’s subsequent Model X and Model 3s, are “pushing the limits of what’s safe and what’s allowed by regulations,” Musk says.

Some of the highlights of assisted-driving mode include lane-keeping, where the vehicle will help drivers stay in their lane should they accidentally (presumably without signaling and without actively turning the wheel) drift out of their lane while driving. Also, the vehicle can detect obstacles and actively brake ahead of possible collisions. Musk notes that the vehicle's sensors can sense "soft objects," meaning they can detect “a small child, or even a dog” at up to 155mph. It can also read speed limit signs and adjust speed accordingly and automatically set the cruise control to maintain that speed.

Perhaps the most trivially, and yet unsurprisingly, the most popular assistance feature among last night’s crowd, was the enhanced self-parking. The new Model Ss go well beyond the basic automated parallel parking that has been offered by many luxury car makers for several years. Musk’s offering allows the driver to exit the car in their driveway, and have the vehicle open the garage door, park itself, and turn itself off. Musk hinted at a future feature where the vehicle’s charging plug will automatically connect itself via some form of articulating arm. The reverse of this parking scenario is also possible, with the vehicle capable of moving itself to meet its driver for when it’s time to leave – crazier still, it can use the integrated calendar to do this intelligently, starting itself, turning on the AC, and the music ahead of an anticipated departure.

Musk was among the inspirations for the Iron Man character, and last night’s presentation was yet another demonstration of how far ahead of his peers he is, in both the technology sector and the automotive industry. While most automakers are innovating around new body styles, fancier headlights, and more fuel efficient engines, Musk has ditched the fuel entirely, and is progressively ditching the driver and much of the traditional driving risks along with it. In true Silicon Valley style, he’s attacking the auto problem as much with software as he is with electrical and mechanical engineering. And like Apple, it’s the seamless integration of these various systems and technologies that set the Teslas apart from everything else on the road.

The one recurring complaint that I heard repeatedly among the attendees, was that Musk and Tesla just obsoleted every Model S on the road today, including thousands that are just weeks or months old. The “A” assisted driving technology has already been shipping as a standard feature in every vehicle delivered over the last two weeks. It’s a tough pill to swallow if you just plunked down $80,000-plus. Consumers know that cars depreciate rapidly, but this instant obsolescence is more akin to the way smartphones and other consumers electronics markets operate, rather than the luxury automotive sector.

The D, while enticing, presents less of an issue when it comes to the desirability of existing Model S vehicles. As the ultra-premium option, the P85D will be akin to Mercedes’s AMG and BMW’s M-class offerings, will only be chosen by a small segment of the market. And anyone who previously opted for an economy 60 or 85 rear-wheel-drive Model S, the increased price has already proven to be a limiting factor. For those who live in winter climates, however, the AWD option could make the Tesla a more compelling choice. 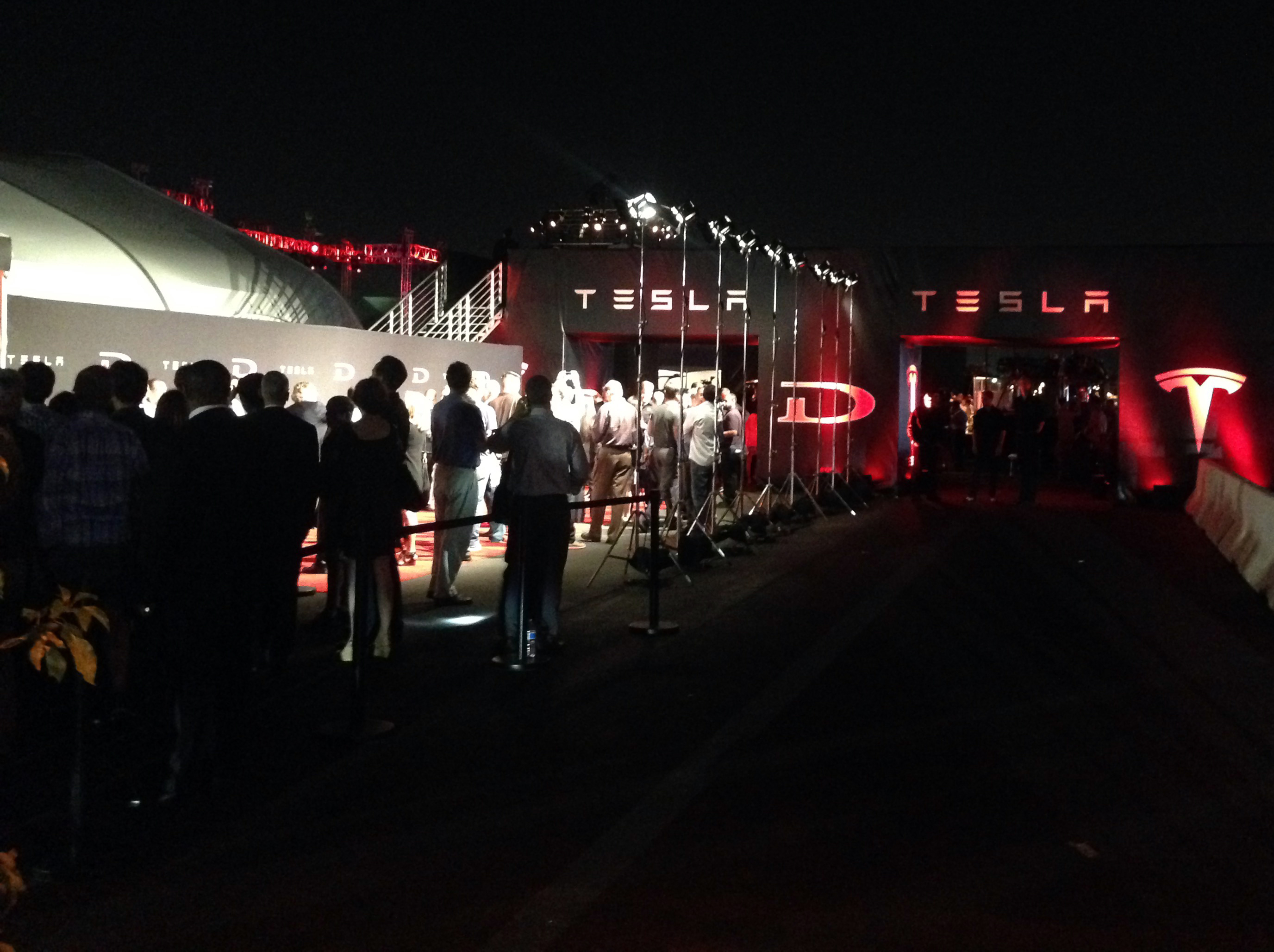 Last night’s event ended with everyone in attendance being invited to take a test drive of the new “D" (video below). Not surprisingly there was a mad dash to the so-called “boarding area.” I was a bit disappointed when it became clear that we would only be riding as passengers, with “trained Tesla drivers” behind the wheel, but the decision was understandable and shouldn’t have been that surprising.

It was an amazing experience nonetheless. The test drive was set up to pass through a neon-lighted tunnel that made the drag race-like experience that much more intense. And once the acceleration test was completed, the driver allowed the Autopilot to take over. Our vehicle quickly slowed down from about 50mph under the driver’s control to 35 based on a posted speed limit sign along the staged route, and then to 25mph after passing a subsequent sign – all this without the driver’s feat touching either pedal. Then, when our driver pressed the turn signal, our Model S automatically changed lanes along the two-lane simulated road. As we approached a stop sign, the vehicle automatically slowed to a stop behind another Model S in front of us. It was both magically, and remarkable simple.

I left last night’s  event feeling like I saw the future of transportation. Sure, there may be a time where all cars are driverless, or where Musk’s proposed Hyperloop is the mode of transportation du jour. But for at least the next decade, the Model S’s Autopilot is what drivers should expect. With last night’s demo, Musk reminded the world just how far ahead of other automakers Tesla really is.

This week is the Paris Motor Show, Europe’s biggest auto showcase, and Tesla has likely already upstaged anything that will be revealed there. It’s been only 11 years since Musk risked the bulk of his personal fortune on a crazy idea to of inventing truly sustainable transport. It was a mission that nearly failed, and risked bankrupting him along with it. But today, Musk is sitting atop the automotive industry (and the private space flight industry, and the solar industry). Although down from its September 1st all-time-high of $279 per share, Tesla’s stock is closed trading yesterday at a healthy $257, valuing the company at $32 billion. (The stock was up nearly 1 percent in after hours trading on the news of last night’s event.)

For my money, Musk without a doubt the most interesting and impactful figure in business and technology today. And Tesla, while competing by SpaceX’s promise to see the human race colonize Mars, could have the greatest societal impact of any company this decade. The “D” and the “A” lived up to Musk’s early hype. But the remarkable thing is, they’re surely only a fraction of what the company is working on.