Oracle latest to be sued for Techtopus wage-fixing, following Pando's reporting on its involvement

Unlike most of the secret non-solicitation agreements being litigated, this one involving Google, Oracle and Sun was limited to non-recruitment of management level and above. The plaintiffs representing the class suit (embedded below) are Hogue Belong, who seeks to represent Oracle managers and senior workers affected from 2007 on; and Greg Garrison, an Oracle senior account manager who led the company’s Crystal Ball forecasting software.

“This lawsuit is beyond preposterous and we will move to have it promptly dismissed. Oracle was deliberately excluded from all prior litigation filed in this matter because all the parties investigating the issue concluded there was absolutely no evidence that Oracle was involved.”

That Oracle is now being sued is particularly interesting given that, earlier this year, Pando broke the story that Oracle and Sun Microsystems — now part of Oracle — were among several other companies also involved in Silicon Valley's illegal wage-fixing cartel. Our reporting was based on internal secret documents and memos that showed dozens more companies were involved in the illegal wage-fixing cartel, beyond the seven — Apple, Google, Intel and four others — named in the original class action lawsuit.

The following companies (and by association, their subsidiaries listed in Appendix A) have a special restriction as part of the “Restricted Hiring” list.

The document then defines the terms of Google’s “Restricted Hiring” protocol with the four Big Tech companies:

For each of these “Restricted Hiring” companies, Google has agreed to the following protocol:

The secret internal Google and Apple documents listing all the firms with which they had secret non-recruitment agreements, in violation of antitrust law, were the culmination of a “conspiracy” first hatched in the mid-1980s between George Lucas and Pixar’s top executives — Ed Catmull and Steve Jobs. At least as early as 2004, Jobs included his other company, Apple, in the secret agreement, and in early 2005, with wages soaring at record levels in Silicon Valley, Jobs threatened Google’s top executives to join his wage-fixing cartel or face war. 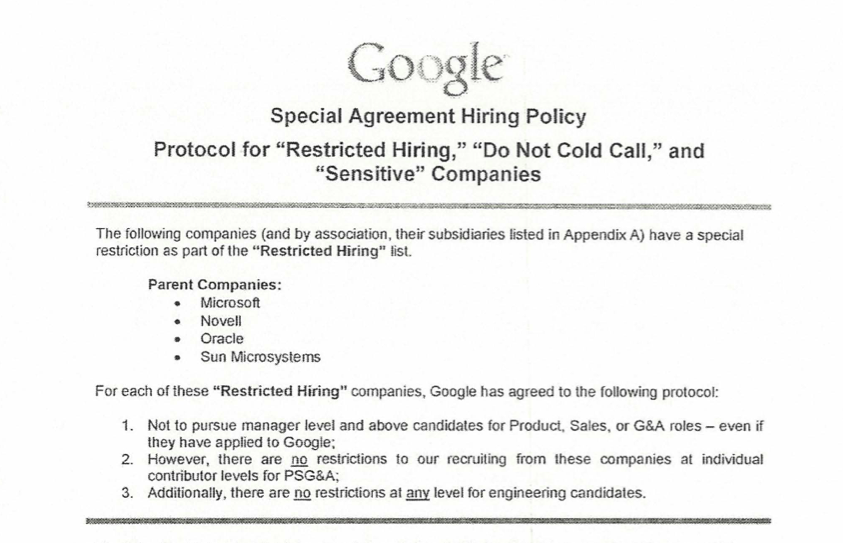 In those early months, Google’s Eric Schmidt was worried about getting caught in a blatantly illegal wage-fixing scheme. In October 2005, Google’s Senior VP for Human Resources, Shona Brown, emailed Schmidt a preliminary list of companies that Google had formed illegal wage-fixing agreements with, asking Schmidt if it was okay to share their list and protocols with eBay/PayPal, one of their co-conspirators.

“I would prefer that [Google] do it verbally since I don’t want to create a paper trail over which we can be sued later? Not sure about this.. thanks Eric”

By 2008, however, Google and other conspirators in the Techtopus were no longer fearful of breaking the law, leaving a shocking paper trail of flagrant violations of antitrust law — and of abuse of their own workforce.

This brings to three total lawsuits so far to emerge from the Techtopus wage-fixing cartel. The second lawsuit followed Pando reports this summer exposing the extent of wage-fixing agreements in the visual special effects industry going well beyond Pixar and Lucasfilm to include Dreamworks Animation, Disney, and others. That lawsuit, filed in September on behalf of VFX employees, has been folded into the main lawsuit still ongoing in Judge Lucy Koh’s District Court seat in San Jose, and we might expect to see the new Oracle-Google lawsuit folded into the larger lawsuit as well.

As for the Big Lawsuit itself — the wage-theft class action suit against Apple, Google, Intel and Adobe — that is coming apart in interesting ways.

Briefly: In May, the two sides agreed to a $324 million settlement, which the plaintiffs’ attorneys hailed as a record settlement and the first ever successful use of antitrust law to bust a wage-fixing cartel. However, at least one of the plaintiffs objected to the settlement as too low given the estimated $3 billion in suppressed (that is, stolen) wages — a figure which would be tripled to $9 billion under antitrust law if successfully litigated in court.

Judge Koh sided with the dissenting plaintiff, Michael Devine, and in early August she tossed out the $324 million settlement as too low, and set a new trial date for January 2015.

As if there haven’t been enough judicial branch rarities in this case, late last month the 9th US Circuit Court of Appeals issued a surprise ruling of its own, agreeing to hear a petition for writ of mandamus by the defendants’ attorneys representing Apple, Google, Intel and Adobe, who want Judge Koh taken off the case and the whole thing re-litigated. In layman’s terms, what the 9th Circuit’s unusual decision means is that the appeals court has agreed to consider the defendants’ writ to have Judge Koh taken off the case — highly unusual in itself. It doesn’t mean that the Appeals court will agree — that would be more shocking and unusual than just about anything in this case. But the very fact that the 9th Circuit gave this degree of formal validation to a more routine defendants’ appeal — which is almost always tossed out as a routine matter before being allowed to be heard, according to legal professionals I've spoken to off the record — shows again how important this case is, and how it challenges so many legal and political assumptions that have been taken for granted in Silicon Valley and beyond for decades now.

But as the Tech Revolution rolls on in apparent lockstep with accelerating inequality, the assumptions — that Tech would level out our differences in ways that politics never could, making us more equal, and more empowered, than ever before — is giving way to a dark foreboding about the awesome and tyrannical power of Tech over our atomized individual selves. Tech’s private power over huge swathes of our public lives is hard to pin down, shrouded in abstruse jargon and references. Which is what makes the Techtopus wage theft case so important, politically and legally. Anyone can read the emails by Steve Jobs and Eric Schmidt, the depositions by Ed Catmull and Sergey Brin and George Lucas — and see in plain language, that behind the algorithms and techno jargon, there is a very familiar and frightening power, concentrated in the hands of a dozen or two people, manipulating and controlling the fates of hundreds of thousands of lives.

Last week, the plaintiffs in the Techtopus wage theft case told the appeals court that they don’t want Koh taken off the case, asking it to toss out the Big Tech attorneys’ writ. By almost any standard but today’s, Judge Koh is the furthest thing from radical — but, as law professor Orly Lobel has said, Judge Koh is very serious about antitrust law. Taking antitrust law seriously could very well be too radical — it’s certainly a departure from the dominant legal philosophy of the past 35-40 years. Whether or not Silicon Valley — and by extension, American corporate law — is ready to “take antitrust law seriously” again is something the 9th Circuit will soon decide.