Surf Air is growing up and it’s got some new toys to reflect that maturity. The first in the company’s arsenal of shiny new objects is a brand new Pilatus PC-12NG Aircraft. The second is a new route to sunny San Diego. In both cases, the company has more of the same on the way in the coming months.

After announcing its all-you-can-fly, membership-driven airline concept in early 2012 and then flying its maiden public flight in summer 2013 from Burbank to the Bay Area’s San Carlos, Surf Air has grown to a multi-city operation with more than 1,000 paying members. The company now serves Los Angeles’ Burbank and Hawthorne airports, Santa Barbara, San Carlos, San Mateo, and Truckee, with Carlsbad’s McClellan-Palomar Airport joining the list on Tuesday of this week.

I had the pleasure of joining Surf Air CEO Jeff Potter – who joined the company from Frontier Airlines after the resignation of founder Wade Eyerly – executive chairman Sudhin Shahani, and early investor Bill Woodward (Anthem) in testing out the new plane and scoping out the setup at McClellan-Palomar during the company’s regional launch party Monday evening. It was a high class experience, to put it mildly.

Like Uber in its early days, Surf Air has always been about allowing its members to “ball on a budget.” That experience has only gotten better over time. The company still employs the same concierge service to aid members in booking travel, including hotels and rental cars if needed in destination cities. And members can still drive right up to the terminal, hand their keys to the valet, and board a waiting private plane without much in the way of TSA-style security. But with the spiffy new planes and an increasing route offering – all of which is accessible under the same flat membership fee – there’s a lot more to like about Surf Air.

The company worked closely with Bespoken, a New York fashion house, to design the custom interiors of its new Pilatus fleet. The new planes have eight seets, rather than the seven in the three 2004-model Pilatuses already in its service. The seats rotate 180* so they can face forward, back, or angled into the aisle, allowing passengers to engage in group conversations, while still avoiding ever-awkward knee-contact. The new planes are also equipped with wi-fi, but the company is still in the process of negotiating service contracts, meaning in-flight connectivity is still a ways off.

As has always been key to Surf Air’s economics, the Pilatus is a turbo-prop aircraft, meaning it costs about a tenth of what a jet would to operate. This limits the plane’s speed and range, slightly, but makes it an ideal choice for the short regional flights around which Surf Air’s model, and its membership price points are structured.

Surf Air has only taken delivery of one new plane today, but will be getting the second immediately after Thanksgiving and a third by year’s end. Add to that another nine planes in 2015 and three more in Q1 2016 and Surf Air will have a fleet of 18 planes criscrossing the Western US (including the three 2004 models). Each new plane will cost the company $4.4 million, in round numbers, a bulk discount from the $4.8 million its fully-loaded models would command individually. Surf Air has soft orders in for another 50 Pilatus planes over the next five years, but will need to secure additional financing to make those orders a reality. 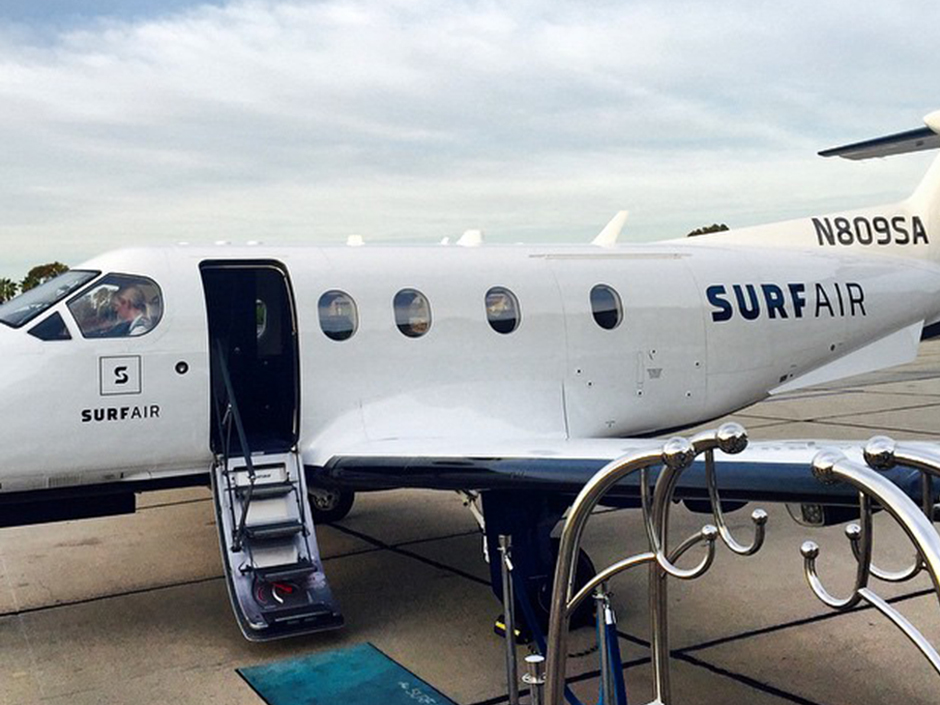 The company is paying for this major expansion with a new $65 million credit facility secured from White Oak Global Advisors for exactly this purpose. Add that to the $17 million in venture capital Surf Air has raised, and the minimum $21 million in revenue its generating (based on 1,000 members, and the base membership fee of $1,750 per month) and this is no longer a modest operation. Surf Air is backed by NEA, Base Ventures, Velos Capital, TriplePoint Capital, Anthem Venture Partners, Wavemaker Partners, Baroda Ventures, ff Venture Capital, Plus Capital, and Mucker Capital, as well as individual angels.

With its growing fleet, Surf Air aims to dramatically increase its coverage of the Western US, both by adding additional cities, and by adding more flights on existing routes. In addition to Carlsbad, the company plans to add coverage to Oakland in December, and later Las Vegas*, with Arizona, Texas, and even Cabo in high priority thereafter. (*The company currently offers chartered flights to Las Vegas, but aims to operate its own flights following regulatory approval.)

“The addition of both Oakland and Carlsbad is just the beginning of the exciting growth opportunity and expansion plan for Surf Air,” Potter said in a statement on the expansion. “Both markets are largely underserved by commercial carriers and hot spots for California-based business and leisure travelers. We intend to continue to expand to new markets with similar characteristics that benefit our existing membership base and introduce our innovative experience to new members.”

Longer term, eastern US routes that include New York, Boston, DC, and Florida could be in the works; however connecting the coasts with the current small planes is unlikely. That said, Surf Air has not yet received the regulatory clearance to operate interstate, meaning that at least for the near-term, this will remain a California-only operation. That clearance is only a matter of time, according to Potter.  When Surf Air does eventually fly out of state, routes longer than two hours will likely require a layover, not because the Pilatus doesn’t have the range, but because the lack of all but an emergency toilet and the need to keep planes in heavy rotation dictates shorter flight legs.

Given its price point and shared-flight model, Surf Air is competing more with Southwest, Virgin America, and their fellow legacy carriers, rather than NetJets, XOJets, and private plane ownership. In fact, only 12 percent of its current members were previously customers of the private aviation industry, Potter says. And with a 1/16th fractional share of a Pilatus through PlaneSense running $324,000 plus $5,000 per month and offering 50 to 70 flight hours per year at $745 per hour, the comparison is not even close.

With the average Surf Air member flying just 3.6 one-way legs per month – and 22 percent flying less than one flight per month – the economics still don’t add up for many members compared to flying commercial – even business class. But, the reason members choose Surf Air, according to Shahani, is to regain time in their already busy lives. The value of that time, and the experience of flying with equally successful, and often interesting fellow passengers, more than makes up for the difference.

At the McClellan-Palomar party I met several dozen of the 100 early members that the company has signed up in the region. Some were frequent business travelers who saw Surf Air as a way to avoid the madness of multiple commercial flights per week, not to mention the time away from home and office. Others were property owners in other locales like Santa Barbara and Lake Tahoe – or prospective ones – who looked to Surf Air to help them get more use out of that investment. Others still were regularly driving the 100-plus miles between San Diego and LA, and expect Surf Air to make that a far less painful commute. But, what all of them mentioned to me, regardless of their reason for joining, was how they expected to make friends and conduct business with fellow members in this still intimate club.

To this end, I couldn’t help but feeling like the Surf Air community mirrors, in many ways, the Tesla owner community. Whereas the latter sees relationships build around frequent encounters at supercharger stations scattered across the US, Surf Air is promoting the same sort of interactions among its fliers in private airport lounges and during casual flights throughout California. And unlike in a Tesla, you can drink in a Pilatus, traffic is minimal, and the views are more often than not spectacular.

Surf Air may never grow to the scale that it becomes a true challenger to either the Southwests or NetJets of the world. Nor does it have to to be considered a success and to deliver a return to its investors. Surf Air can be profitable with just six planes, according to Shahani, who thinks the company can realistically reach cash-flow positive status as early as April of next year. The company’s membership has grown more than three-fold this year, with better than 50 percent of sales now going to corporate customers.

There are still questions as to what push-back Surf Air will get from legacy airlines and fellow upstarts looking to ape its increasingly-popular model. But the early results and continued growth of the current market leader for membership-based air travel suggests that this model has more legs than many gave it credit for in its earliest days, myself included.

“We are creating a growth model that is dictated by demand from savvy consumers and making private air travel affordable to a greater number of travelers,” Shahani says.

Surf Air isn’t for everyone. But given my experience earlier this week, and my time discussing the business with its management and countless current and prospective members, I can say it’s a model that will appeal to a lot more people than many originally anticipated (myself included). As Ferris Bueller might say of a Surf Air membership, “It is so choice. If you have the means, I highly recommend picking one up.”