[Editor's note: The following represents the combination of two articles which originally appeared on the UberDriverMiami blog and have been republished here unedited with the author's permission. The author has requested to remain anonymous due to the risks revealing his identity would pose to his relationship with Uber. Pando has verified that the author is in fact an active Uber driver. The author was not paid for his work.]

You are a scumbag.

I can’t say you are bad at building a business, you’ve scaled this thing with tremendous growth year after year faster than any business from Shark Tank, but you are still a narcissistic, and self-loathing liar; taking advantage of those you call ‘partners’ every step of the way. You got this going from the ground up, and for that, you certainly deserve to be rewarded handsomely…and so far you have, with your multi-billion dollar net worth. I congratulate you, I sincerely do Travis. But while you sit there on your billions and continue to grow your business, can you stop fighting me and the other core representatives of your business over what is pennies to you?

You see, I’ve invested more capital into your business over the last year than you have, and its increasingly becoming a losing proposition. I am indeed one of your “partners.” I don’t feel like your partner though, every time I turn around, you are dictating the terms, and somehow, they always fall out of my favor. I don’t even get consulted. Not even a simple, ‘how would you feel if we tweaked this a little?’ It’s starting to feel like a better description than ‘Uber Partner’ would be ‘Uber Sucker.’

That’s right Travis, I’ve taken my 2 year old mid-sized SUV, and I drive it on the Uber network. I have a car payment, insurance, fuel, maintenance, car washes, and more to cover. I only do this part-time on the side, but with just 4 months in, this should still be new and exciting. Instead, I feel like a 20 year vet, remembering the golden days of driving, when rates, back in the day of September 2014, were $1.75/mile and $.20/minute on UberX in my market. Everyone hates that old surly guy in the room with the stories of ‘how it used to be,’ but that’s right, two significant cuts in just the last three months down to $.95/mile and $.16/min has made me that old surly guy in the room.

The funny part is, the customers don’t even realize there was a cut, especially since the rate breakdown was removed from the application for customers to see. Plus, it comes as Miami hits its High Season. While the rest of the country may be in that Winter Slump you claimed as justification for cutting rates in 48 cities, Miami is just jumping off in our prime high season. You’ll get to show some stats about how many more rides we got, just when we were going to shoot up in users anyhow.

But Travis, Uber always ignores the driver’s expenses. They did so when they claimed NYC drivers were making $90k and San Francisco drivers were making $70k. The IRS in 2014 had a standard mileage rate of .56/mile. It’s what the IRS determines to be a reasonable rate of expense using a vehicle for business. There’s also a factor of dead miles. Extra miles on the car to get you to a location where you can expect a pickup, or miles to the pickup location, and miles driven to get to your next pickup. Many report driving a dead mile for every revenue miles. For this purpose, I was kind and used just 1 dead mile driven for every 2 revenue miles. After calculating expenses Travis, my INCOME for very same ride for these three sets of rates is: $6.43; $4.07; $2.18.

Income, the number that matters, the number that Uber ignores, is reduced 36.7% on the first cut and a cumulative 66% after 2 rate cuts. Even if a driver had an hour of calls back to back to back, they can not even earn above Florida’s new 2015 minimum wage without surging fares. Travis, perhaps you can tell me what part of those $7/hr in income is that gratuity you keep insisting is built into the fare? Travis, It’s to the point where now Uber makes more money on an individual ride than I do…

Forced to accept less for a fare, and a lower profit margin for it. That’s not very partner like of you Travis!

Yet everyday on craigslist Travis, I still see these ads about all the money you can make Ubering. For some reason, (and despite English being a listed requirement of driving for Uber), the advertisements in Spanish says you can make 1.5 times more. It’s earn $1000 when the ad is in English, and earn $1500 when it’s in Spanish. Does Uber pay more for being bilingual in a bonus I have not yet heard about? Or does Uber believe Spanish speakers are more gullible? Or can deal with bigger disappointment? Or maybe you believe they work longer hours? Why the difference? 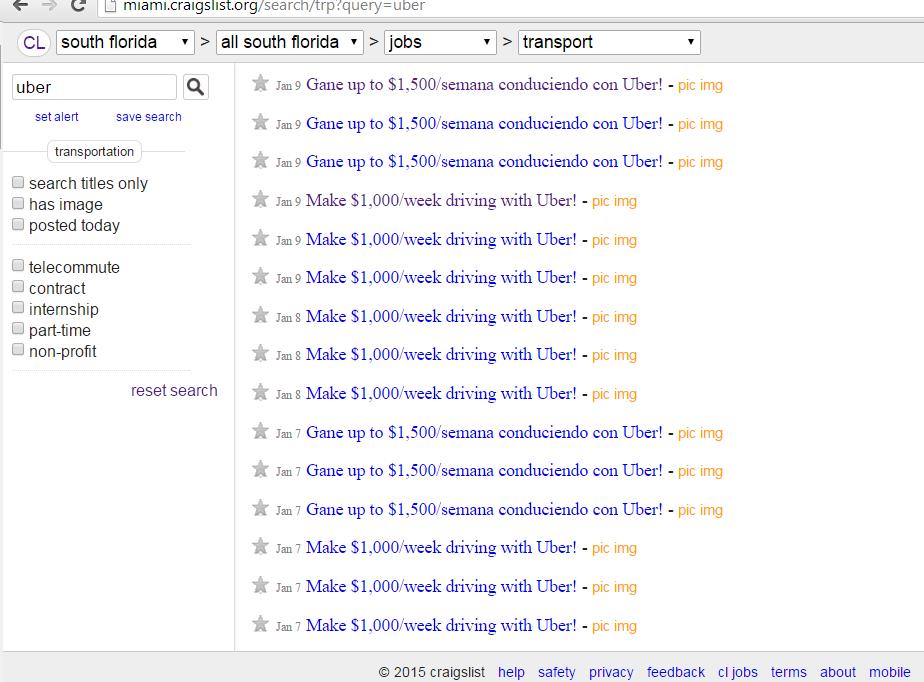 Travis, Even if I believe an UberX $20/hour in fares as noted on the craigslist ads, (I don’t) and let’s say that is based on 2 rides an hour (the precedent set by the Chicago example as justification for the drop). At 25 MPH, a very high average speed for this type of driving, it would yield 2 rides averaging 6 miles and 14.4 minutes in length each. Averaging near 50% occupancy rate is incredibly high in this business, but I’ll continue with their example: From the $20/hr: $2.00 goes to Uber on the Trust and Safety Fee. $3.60 goes to Uber on their commission. That leaves $14.40 in Revenue and you might be feeling good about that. But that’s up to $10.08 in Expenses ($.56/mile and dead miles to revenue miles 1:2) Just $4.32/hour in INCOME is left at their inflated fares example. Meanwhile Uber collected $5.60. At the end of the day, you are just trading the equity in the car for some upfront cash.

Travis, It’s clear Uber depends on bringing on drivers that do not understand how to do the math. It’s why we lose features on the driver’s dashboards that would help us understand our revenue, expenses, and income. It’s why you keep advertising how much can be made in fares, but not in revenue and income. It’s why you ignore driver’s expenses when you report on how much they make…and then you push these subprime leases charging drivers over 20% interest on them while cutting rates all along. Those drivers have even higher operational expenses with their new cars and high interest rates. It’s why you are a scumbag.

Travis, I know I was a little harsh, and called you a lot of names, but the gist of all this is: how about helping out the little guy who is the backbone of your empire, and offering what is still a very fair price to the customer. Your drivers want to work, they want to earn honestly, they want to provide good service. However, they system is now rigged against them. If it’s not the horrid car financing deals that gets them, if its not the lack of insurance coverage for the driver that gets them, if its not the ridiculous rating system, if its not the authorities that get them for operating illegally, its your own dastardly low rates that’s going to do them in. All while you smile and tell everyone how great everything is and roll in a fresh crop of drivers.

Travis, your best drivers are already leaving in droves now, and it might still be a little bit away, but eventually you’ll burn through us all as we slowly realize this is not worth it as a minimum wage job pays better. As the quality of the driver and the ride continues to fall to conditions worse than those taxis you were beating into the ground, your customers will find another way to get from Point A to Point B.

[Editor's Note: The following update was published to the UberDriverMiami blog one day after the above article.] 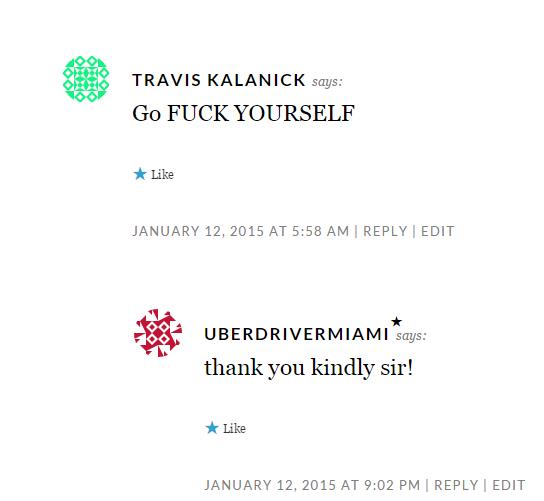 Today, I went checking on craigslist…and I noticed a couple changes to your advertisements around here….

First…here’s the the image I posted in my entry, Winter Slump…..

Now, here’s what I noticed today, with a little side by side comparison from last week to this week. 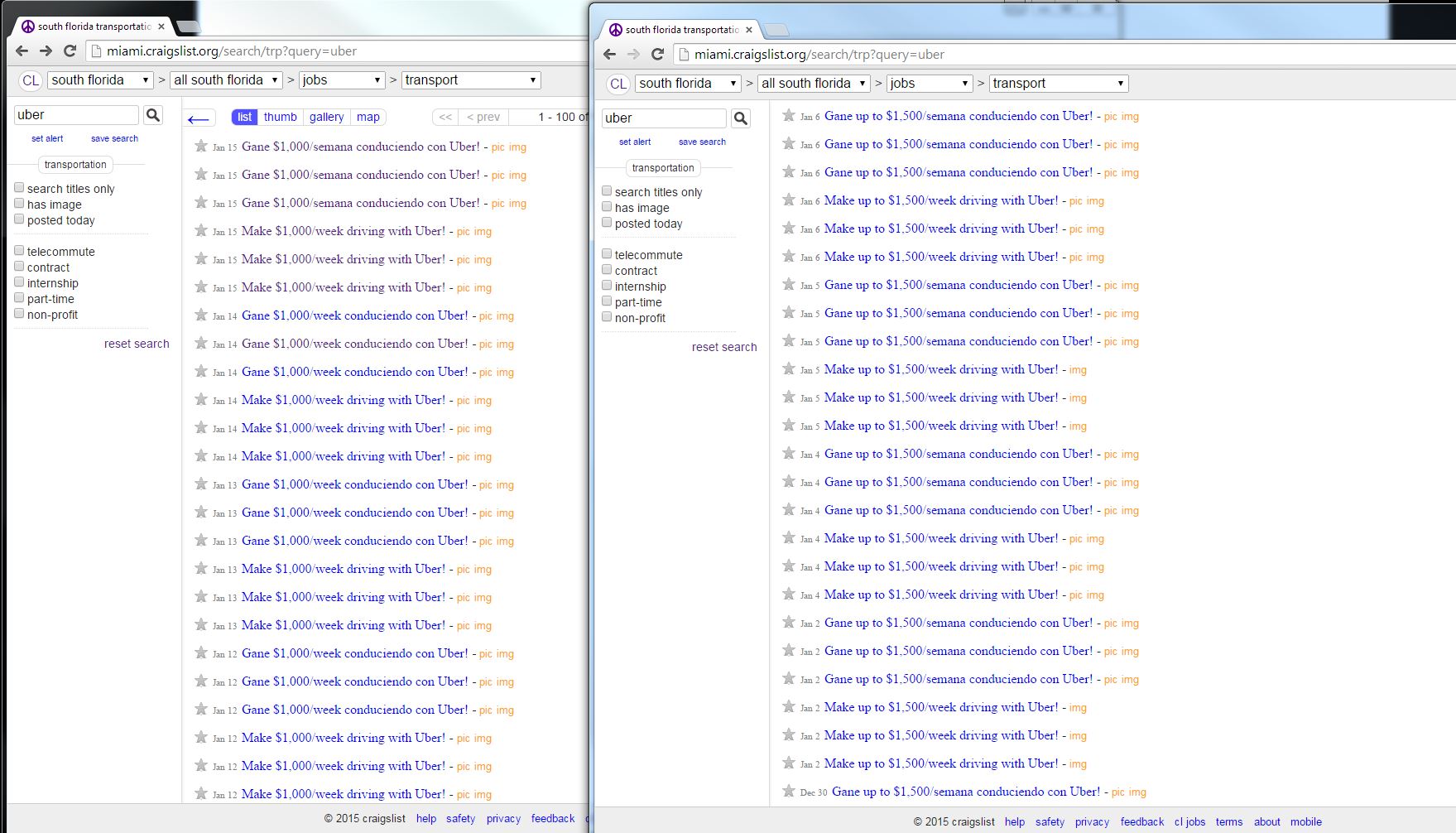 So, lets talk about what jumps out at us first….

You changed how much your drivers can earn IN FARES in any given week. Last week we could do up to $1500 in fares, and now we are down to earning up to $1000 in fares. Of course that’s really just around $720 in revenue if you really could make that much on UberX. And finally, your real true income is just around $216 after clearing all expenses. But its hard to get excited about $4.32/hour, even if there is a company car involved, so I see why you go with the misleading route and ignore all driver expenses in every business decision.

Did anyone else notice that other little subtle change to show they are reading???

Now if you are a Spanish speaker, they stopped trying to tell you that you could earn even more! Or that you were more capable of working 70-80 hour work weeks. So there is no imaginary bonus for speaking Spanish anymore. To my spanish speakers: Sorry if I had gotten your hopes up.

I think it was a wise move of your staff Travis, to stop throwing in how much more you could make, but only in Spanish. You got called out for advertising more earnings in Spanish, and your team took action! Congrats on a small step on doing the right thing.

Travis, anyway, you are welcome again. I happy to see someone on your staff is listening. As always, look forward to hearing from you.

[Editor's note: The above represents the combination of two articles which originally appeared on the UberDriverMiami blog and have been republished here unedited with the author's permission. The author has requested to remain anonymous due to the risks revealing his identity would pose to his relationship with Uber. Pando has verified that the author is in fact an active Uber driver. The author was not paid for his work.]