If Pop succeeds in video messaging, it will be by embracing, not fighting the constraints of the channel

Social video is a nut that entrepreneurs and investors have been trying to crack for more than a decade. Content-focused offerings have found more success, as highlighted by YouTube and Vimeo for desktop (and increasingly mobile), or Instagram Video and Vine as mobile-first market leaders. But video communication, on the other hand, still lacks that killer app.

In each era, heavily funded and widely-hyped entrants have tackled this market, each with a different twist. In the early Web there was Chat Roulette, which quickly evolved into a cesspool of unexpected nudity and other bad behavior. More recently Skype, Google Hangouts, and Apple’s Facetime, have introduced passable solutions, but none that would be described as beloved by their users, let alone particularly reliable. Moreover, each is likely too formal and too sterile for today’s Snapchat and WhatsApp dominated world.

The roadblocks confronting video communication are many, but the most obvious is connectivity. While buffering is annoying when you’re watching cat videos on YouTube, it’s an absolute killer when you’re trying to talk to a loved one halfway across the world. With more and more Internet usage happening via mobile, particularly on a global basis, this is an issue that is growing more, not less pronounced with time.

The other common issue that has handicapped many otherwise well-designed products is the fact that most people are simply self-conscious and not terribly comfortable on camera. As a result, when choosing a communication channel, text, still photos, and even phone calls still get priority over video.

All of this context makes the latest entrant into the social video category interesting, not because it solved any of these issues, but rather because it’s embraced them and turned them into assets. Pop, which launched today under the leadership of former Tumblr and Flickr product manager Josh Nguyen and Yahoo alum Alaric Cole, calls itself a lo-fi (low fidelity) video messaging platform. The product is mobile only, and is currently available only for iOS.

Where Pop differs from many of its predecessors is that it is asynchronous video chat, making it more akin to text messaging or video voicemail. This simple tweak overcomes many of the bandwidth issues that have plagued video chat in the past, and also addresses challenges like time-zone asymmetry and “missed” connections.

Pop also deliberately stylizes its videos in a way that makes them look, appropriately given the name, a bit like Andy Warhol-style pop art. This has the duel effect of making Pop visually unique within its category and also relieving a good deal of the stress of trying to “look perfect” on camera.

“The way our messages look lets people get over the idea that they need to craft an image of themselves so they can just being able to relax and talk normally,” Nguyen says. 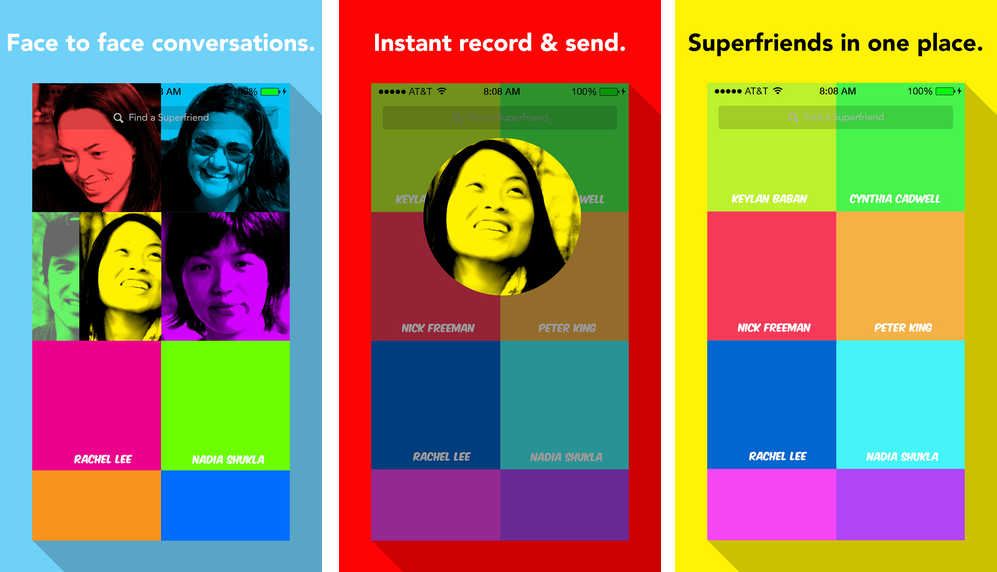 The app has also taken cues from other successful products, namely Vine (and before that Twitter), by mandating brevity with 5 second limits for each video message. On the other hand, Pop rejected what may be the biggest trends in mobile communication, ephemerality and anonymity. Pop messages do not disappear after they're viewed – and can be viewed in succession as a cohesive conversation by swiping from one message to the next. Also, users’ names (as they are listed in your address book) are appended to each message.

Nguyen and Cole created Pop because they wanted a better way to keep in touch with friends than the curated versions of everyone’s lives available on Facebook and Instagram. They intuitively knew that video would be the richest communication medium possible, according to Nguyen, but had also seen the prior carnage in the space and were mindful of the challenges.

“There’s a limit to how much you can express via text message,” Nguyen says. “But video has been a brutal category.”

The two founders are working alone on the product for the time being and have funded the project via “low six figures” worth of friends and family investment. The pair plan to expand the team slowly, first with an eye toward expanding to the Android platform, based on market feedback following today’s launch.

Pop has competition in the asynchronous video game, including Skype offshoot Qik and Glide. But like Snapchat upended its photo and text-based messaging forbearers, Pop is hoping to do the same by making its touch-centric app faster, more intuitive, and easier to use.

Perhaps the biggest challenge facing Pop, however is the inertia of established consumer behaviors. Anyone over the age of 25 has no-doubt used video chat in some form and odds are their perceptions of the format are overwhelmingly negative.

Thus, for Pop to win over users, it will need to unwind these preconceived notions, something that will require a product that's not just a little better, but an order of magnitude or more better than both existing video chat apps, and also their text and photo-based chat analogs. Then again, if the growth of today’s mobile giants like Snapchat, Instagram, and Yik Yak are any indication, Pop’s earliest market is likely to be high schools and colleges, where Chat Roulette and Skype are little more than abstract products your parents use(d).

Pop has been live in select international markets like Chile and Hong Kong – where Nguyen and Cole have international friends and thus elected to test the product – for several months, but as of today is now available for download globally. The two founders are likely well-connected enough in Silicon Valley to seed the app with North American users, and they’ve come up with a clever approach to new user acquisition that should keep the flywheel going from there.

Once a user signs up for the app, they can message anyone in their phonebook, even if that person doesn’t have a Pop account. That recipient receives a text message with a GIF of their friend’s face and a link inviting them to communicate via Pop. It’s a friendly and intriguing enough approach that I suspect will lead to better than average conversion. Whether users remain engaged once they sign up will depend on how much value, either utility or entertainment, they find in the product.

There are very valid reasons why video chat has historically been such a difficult sell to consumers. As Pop looks to reverse this trend, the company will benefit from the examples of what doesn’t work offered by its predecessors. But just as important appears to be Nguyen and Cole’s willingness to embrace, rather than fight, the natural constraints before them.