As "Right To Work" becomes law in Wisconsin, a reminder of its inventor's racist past

Wisconsin is historically one of the most pro-union, progressive states, home to the legendary “Fighting Bob” LaFollette, and the only community-owned nonprofit NFL football team— so gutting unions in labor’s historical heartland is like what Russian homicide detectives call a “control shot” — the point-blank bullet to the head that makes sure the bleeding target on the ground never breathes again.

It’s also gratuitous, like doing donuts on road kill, when you consider how close to extinction labor unions have fallen over the years. Only 6.6% of private sector workers are in unions today, down from a peak of 35% in the mid-1950s. It’s only thanks to public sector unions—which Scott Walker destroyed in Wisconsin in 2011—that the overall percentage of the workforce that’s unionized is 11.1%. California, which has rejected “Right To Work” laws in the past, has the largest number of union members in the country —  2.5 million workers — though as a percentage, California ranks sixth highest.

Which reminds me of two things: First, Scott Walker proves that pranks don’t work. Four years ago, when Walker first waged right-wing jihad on Wisconsin’s public sector workers, an old comrade of mine, “Buffalo” Ian Murphy, pulled off the single greatest phone prank ever. Posing as billionaire David Koch’s voice, Murphy managed to swagger his way past Gov. Walker’s aides and into the governor’s handset for a long 20 minute call, which revealed Walker as a grotesquely slavish Koch towelboy. Four years later: Walker is a top presidential contender, the Kochs are worth over $100 billion, Koch-backed groups passed “Right To Work” in Wisconsin...and “Buffalo” Murphy is an ex-con, jailed in 2013 for brandishing an unconcealed, fully loaded dildo at a mob of homophobic religious fanatics. As the saying goes, "The Koch is mightier than the prank."

The other thing Walker’s RTW law reminds me of is some unfinished business I have with the number one national organization behind the law: The National Right To Work Committee.

A couple of years ago, I wrote an article for NSFWCORP (since acquired by Pando) exposing the ugly, racist roots of the whole “Right To Work” movement, tracing it back to the brains behind “Right To Work”: Vance Muse, the loonie anti-Semitic, anti-black Texan who coined “Right To Work” in the early 1940s, and worked Karl Rove-like to push through the first “Right To Work” laws in the South in the 40s and early 50s. Since a lot of people these days are not in tune with labor union struggles and what “right to work” laws even mean, my article exposing the KKK racist who started “Right To Work” created a bit of a PR headache for the union-busting movement.

In the weeks and months that followed the publication of my article, people I know started forwarding me emails from a certain Stan Greer of the Washington, DC-based “National Right To Work Committee”. Greer avoided me personally, but trolled anyone who quoted my article, falsely claiming that my article misquoted Vance Muse, inventor of “Right To Work”. A great labor reporter, Moshe Marvit, forwarded me one of Greer's trolling emails he sent to Marvit's co-author of their book "Why Labor Organizing Should Be A Civil Right":

Richard Kahlenberg, for your information, I submitted the following note to Snopes.com this morning.  Perhaps your coauthor Moshe Marvit would also be interested, but I do not have an email address for him.

Recently, a number of commentators on the Internet who oppose state Right to Work laws have alleged such laws have "racist roots."  As proof, they cite an alleged 1937 quote from one Vance Muse, who became a Right to Work activist in the early 1940's.

The earliest source I can find for the quote dates from more than 40 years after the words were allegedly said.  I think it's bogus, but it's hard to prove that.

Here is the quote and a link to a new Internet blog post citing it:

A key driver of the right-to-work movement beginning in the 1930s was Texas businessman and white supremacist Vance Muse, who hated unions in part because they promoted the brotherhood of workers across racial lines. As author Mark Ames notes, Muse bluntly outlined the thinking behind "right to work," declaring, "From now on, white women and white men will be forced into organizations with black African apes whom they will have to call 'brother' or lose their jobs."

Stan Greer After I got that email from Greer, others I know started asking me for hard copy proof of my quotes. I had a librarian from the University of Nevada Las Vegas help me scan and send original page copies of the book “Southern Exposure” by the legendary undercover journalist Stetson Kennedy, in which the quotes were printed. For the rest of you—here is a photo from my own marked-up book of the Vance Muse quote Greer denies ever existed, published in 1946, in the heat of Muse's "Right To Work" campaign: 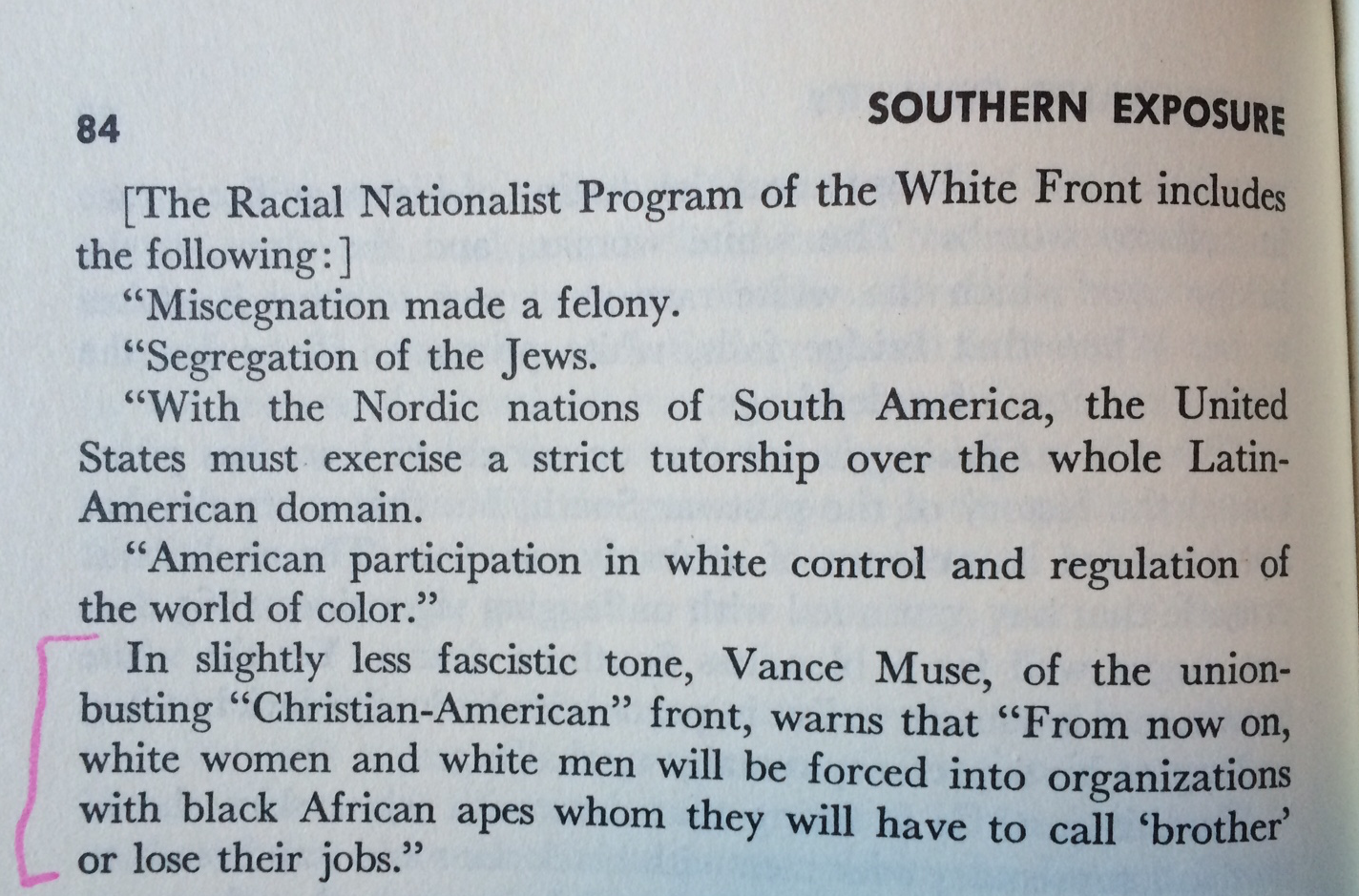 That Vance Muse invented “Right To Work” is not in dispute: If you don’t have time to read Kennedy’s book [available here for free], you can read a more recent history of "Right To Work" by Dartmouth professor Marc Dixon in the “Journal of Policy History”.

In the 1920s and 30s, before Muse invented "Right To Work," he was notorious for lobbying against women's suffrage, against outlawing child labor, against the 8-hour workday, and for "Americanization of the Supreme Court" to remove Austrian-born Jewish Supreme Court Justice Felix Frankfurter. Muse and his groups were investigated by numerous committees and the FBI, but he always landed on his feet thanks to his wealthy sponsors, ranging from Texas oil and cotton magnates, to northern petrochemicals titans like the DuPonts and the Pews.

To get a sense of this strange beast Vance Muse, I'll quote Kennedy's description circa-1946:

The man Muse is quite a character. He is six four, wears a ten-gallon hat, but generally reserves his cowboy boots for trips Nawth. Now over fifty, Muse has been professionally engaged in reactionary enterprises for more than a quarter of a century.

Anyway, as part of my belated response to the National Right To Work Committee’s trolling of my article, here again are some career highlights and quotes from Vance Muse, the Founding Father of the Right To Work movement: All of this is documented in Kennedy’s book and backed by newsclips from the period.

As for Right To Work and California/Silicon Valley: efforts to push through Right To Work laws in California failed repeatedly in the 1940s and 1950s. The first time California considered a Vance Muse-backed Right To Work-like amendment was in 1944. At the time the Veterans of Foreign Wars in California issued a statement against the RTW law: “The proposed ‘Right of Employment’ initiative will not create one additional job. . . . It will, however, if adopted, create a condition under which reactionary employers can ruthlessly exploit working men and women. . . . This amendment proposes to restrict the very liberty and freedom our brothers and sons are fight for overseas.”

In the 1950s, in the heat of the Right To Work battle (with opponents smeared as “Reds”), California rejected RTW twice: first in the legislature in 1953, and then as a statewide ballot measure in 1958. Then, Jerry Brown’s governor-dad Pat Brown denounced the RTW proposition as “a call to class war.” That same year Ohio also put RTW on the state ballot where it too lost. A Cleveland-based African-American newspaper summed up the understanding about Right To Work best:

“No Negro unionist in his right mind is going to vote for this trick-titled bill. It would be the same as committing suicide.”

No surprise then that Senator Rand Paul has been pushing for a federal "Right To Work" law covering all states, whether they like it or not. With all the Silicon Valley money pouring into his 2016 campaign coffers, a President Paul may just get his Right To Work wish.