For the record, here's the Ron Paul newsletter on 1992's L.A. riots and advice on killing black "animals"

Earlier this week, I wrote about Rand Paul's reaction to the riots in Baltimore — blaming the unrest on black culture, "the breakdown of the family structure, the lack of father."

That comment, and Rand Paul's boast that "I am sympathetic to the plight of of the police [in Baltimore]," prompted me to look back at his father and "hero," Ron Paul, and how he reacted the last time urban blacks rose up in outrage against police brutality in a major city—the Los Angeles riots of 1992:

In 1992, the most famous libertarian of all, Ron Paul, was still between Congressional stints when Los Angeles erupted, but he did run a profitable libertarian newsletter, “The Ron Paul Political Report,” to keep his ideas alive. Shortly after the LA riots, Ron Paul put out a “Special Issue on Racial Terrorism” offering his libertarian analysis of what he termed black “terrorism”

In the newsletter, bylined by Ron Paul himself, black people were described as “terrorists,” "animals" and worse.

I think we can safely assume that 95% of the black males in [major U.S. cities] are semi-criminal or entirely criminal.

A few months later Paul's newsletter also passed along this advice on how to get away with shooting black teenagers:

“What can you do? More and more Americans are carrying a gun in the car. An ex-cop I know advises that if you have to use a gun on a youth, you should leave the scene immediately, disposing of the wiped off gun as soon as possible. Such a gun cannot, of course, be registered to you, but one bought privately (through the classifieds, for example.).

“I frankly don’t know what to make of such advice; but even in my little town of Lake Jackson, Texas, I’ve urged everyone in my family to know how to use a gun in self defense. For the animals are coming.” It's not surprising that, today, Ron Paul claims his newsletters, published by his political group and purporting to be written by himself under his own name, were actually the work of an authorized ghostwriter. As if having someone else ghost your racism before mailing it out in your name to your supporters is somehow ok. [Coincidentally, his son Rand Paul's ghostwriter, Jack Hunter, turned out to be a neo-Confederate extremist famous for writing "John Wilkes Booth Was Right."] It should also be noted that in the 1990s, Ron Paul repeatedly defended his racist newsletters in the Texas press; it was only much later, after winning the hearts of some credulous liberals in the late Bush years, that Ron Paul changed his tune and claimed he'd never seen "The Ron Paul Political Report" racist newsletters.

What is surprising is how some of Paul's supporters—and staffers—seem determined to deny the newsletters were ever published in the first place. Shortly after I published my original piece, Daniel McAdams, Executive Director of the "Ron Paul Institute for Peace and Prosperity" (also based in Lake Jackson, Texas), weighed in on Twitter:

When pressed by my editor, Paul Carr, to explain his comment, McAdams went silent. As Carr put it:

Others seemed to think that either I was misrepresenting Ron Paul's newsletters or that somehow I was twisting his words. For the avoidance of doubt, then, I've embedded the full "special" newsletter on the LA riots below, and also the page from the October 1992 issue where Dr. Paul describes how to get away with murdering black kids. Be warned: It all makes for nauseating reading.

And just in case, as some Ron Paulites have suggested, you think Paul's views on race have become less grotesque since the newsletters were published, check out this article on Salon: "Ron Paul: Black lawmakers oppose war because they want the money for food stamps." 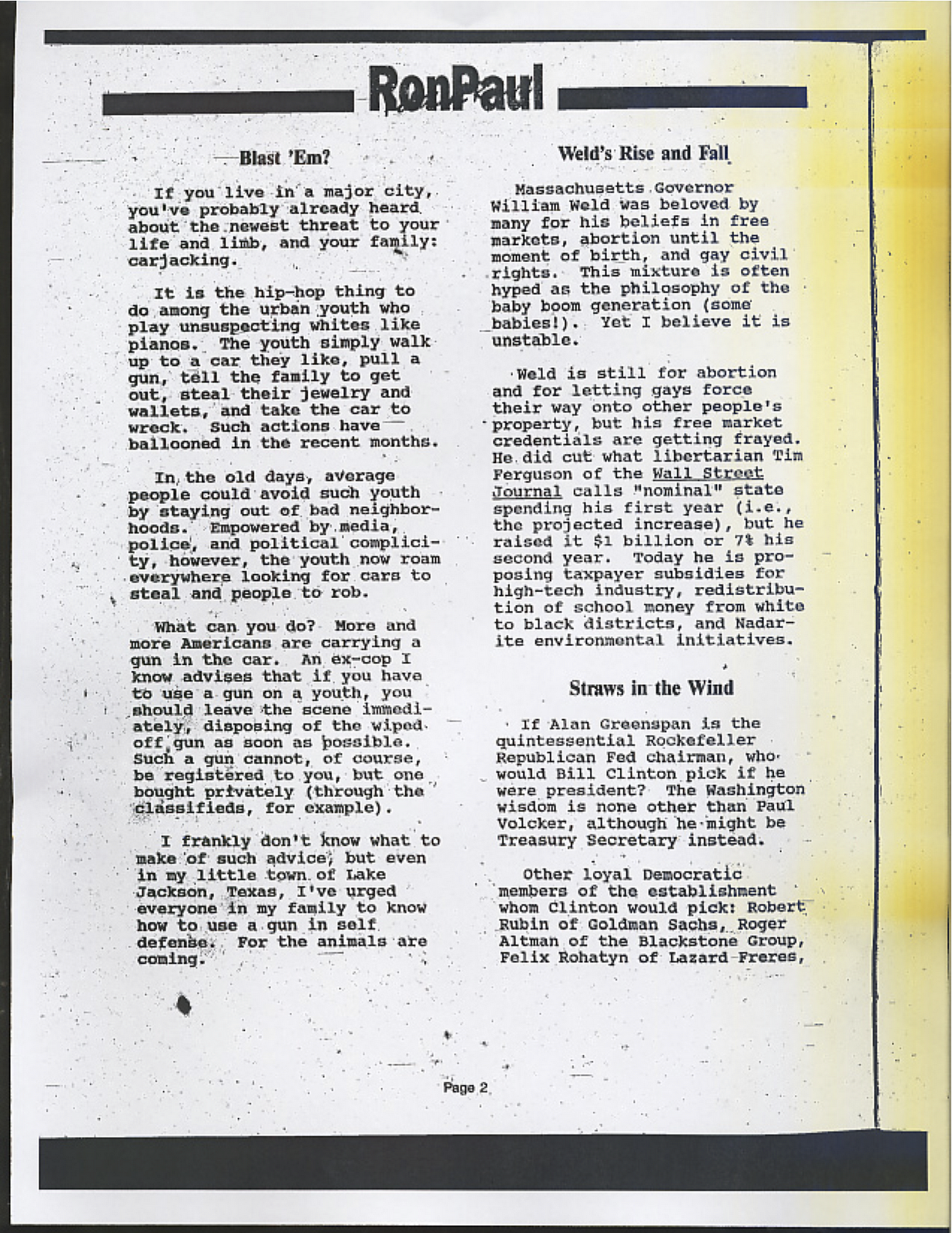