The dangers of cliquebait: Crashing the Code conference, days two and a half

I’m writing this final dispatch a couple of miles from the Terranea Rancho Palos Verdes hotel, where Kara Swisher and Walt Mossberg's Code conference is just wrapping up. I'm filing from here, rather than there, because an hour or so ago I was escorted from the hotel lobby by a security guard and deposited on the curb outside.

When we last spoke, dear reader, I had just been assured by Swisher that I was welcome to stay at the event. It was paranoid to suggest otherwise, she said. Emboldened by my newfound "access" I was ready to get down to the important business of journalism.

Once my first dispatch was published, however, things went south very, very fast. What follows should probably serve as a warning of the risks of clique-bait.

When the sale of Re/Code to Vox was announced on Tuesday, a statistic began to circulate which indicated that Re/Code would remain an independent content property since it and Vox’s The Verge shared only 3-4 percent audience overlap. That afternoon, I Tweeted to NPR’s media correspondent David Folkenflik, asking what to make of this statistic. Folkenflik replied that the two sites both cover tech, but with different sensibilities.

Last night, as I returned to the scene of the party I'd documented the night before, I got a very clear sense of what those differing "sensibilities" might be. Re/Code's Swisher confronted me almost immediately to express that she wasn't thrilled with my reporting. But here's the thing: Swisher is a class act. She expressed her displeasure with calm, sensible, and understated opprobrium. She even shared some of her (actual) grapes with me. They were not sour.

The Verge's editor-in-chief Nilay Patel (pictured above) was also at the same party. I noticed him when he appeared in the doorway of the hotel patio, holding his phone in front of his face, scanning the crowd. Standing behind him was Dan Frommer from Quartz. It's important to understand at this point that Patel is a big guy and, I assume, reasonably strong. Finally he spotted me.

He strutted over to where I was sitting and towered over me, still messing with his phone in front of his face. Frommer sidled up beside him to watch what was about to unfold.

“I am going to tell you everything that is wrong with your article," he said. "First though, do you know who I am?”

I did. He was Nilay Patel from The Verge (pictured below) . 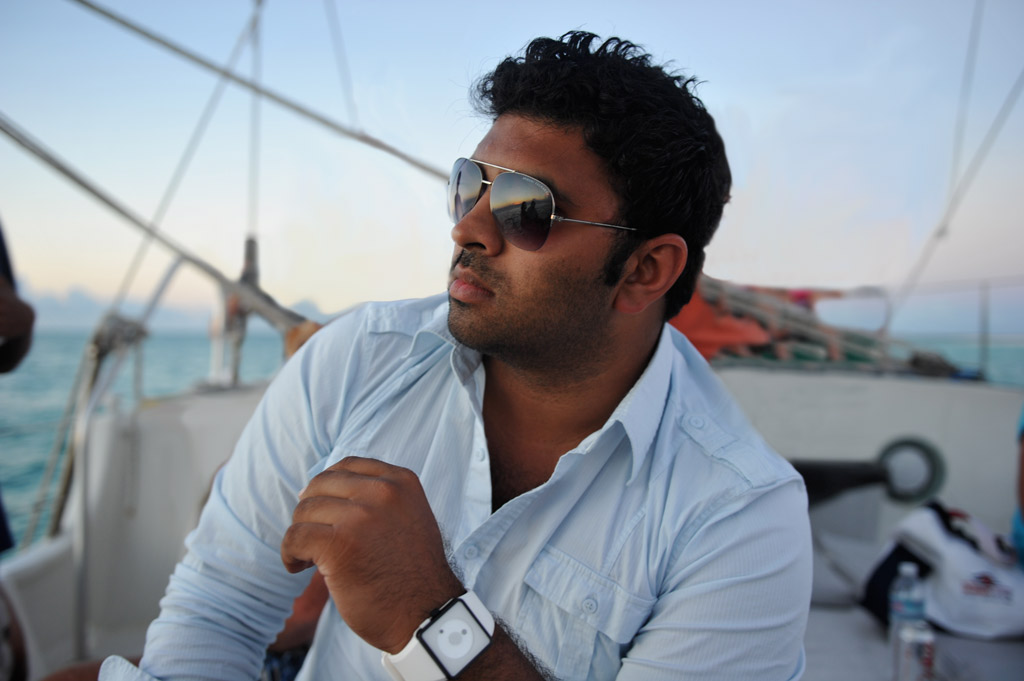 Patel proceeded to list his objections to my article, all of which centered on these three paragraphs:

By 3pm there was relative calm in the center of a gathering think-piece hurricane, as registered attendees gathered hors d’oevres and drinks and mulled over the conference’s shock opening announcement: the sale of Re/Code to Vox.

By luck, I found myself seated on a couch adjacent to one holding Vox’s Chief Product Officer Trei Brundrett, who was talking with Vox’s President and Founder Tyler Bleszinski. As others joined the conversation, including Nilay Patel and Casey Newton of the Verge, two guys in dark suits from Techmeme, and the Wall Street Journal’s Heard on the Street reporter Rolfe Winkler, the topic turned quickly to the matter in hand.

Brundrett reiterated the line that Vox CEO Jim Bankoff had published that morning, that Re/Code wouldn’t undergo any major, immediate product changes. “Except we’ll organize it to make it work better,” Brundrett told the small gaggle as I not so subtly eavesdropped.

First of all, Patel wanted to make clear the conversation did not occur at exactly 3pm. I'm happy to make that abundantly clear. Patel is a busy man and at exactly 3pm, he informed me, he was on a very important conference call. He even offered to show me his planner. He did not confirm or deny being in proximity to the conversation, just that my timing was off. Mea culpa.

I also subsequently learned that there was only one person from Techmeme present, not two. The other man just happened to be sitting next to the Techmeme guy, wearing nearly matching attire. Mea maxima culpa.

Patel's final criticism appeared to be -- he was somewhat incoherent on this point -- that Tyler Bleszinski is not the President and Founder of his company. If you're reading this, Tyler Bleszinski, please update your Crunchbase profile.

Done dressing me down, Patel stormed off, pausing only to receive a congratulatory high five from Frommer, who'd been silently eating up Patel's encounter with me, and grinning like a goon. A high five!

Oh, and one other thing. As Patel made his way from the crowded patio, he turned back and yelled a warning in my direction:

The sensibility on that guy.

After I’d finished my cigarette, I went looking for Patel in the hope of asking him some follow-up questions. Alas he was not to be found. Perhaps he was off looking for more reinforcements: Since our conversation, several other journalists in attendance at Code have made a point of telling me that I was wrong to include Patel in my recounting of the lobby conversation. The Wall Street journal's Rolfe Winkler even accused me on Twitter of "inventing" the conversation before acknowledging that it had taken place but insisting that Patel had walked off before Vox/Comcast was mentioned. (Update: After this article was published, Swisher commented on Twitter: “[N]o one cares about reporters and their interactions.")

In addition, outgoing TechCrunch editor Alexia Tsotsis would like me to make clear that Techmeme's Gabe Rivera -- it was he, apparently -- doesn’t own a suit. Rather he owns a very nice grey coat and some pants.

The Internet has not killed meticulous journalism.

The next day -- this is, today -- I made my way back to the hotel, somewhat shaken by my encounter with Patel and narrow escape from the Well of Souls, but still determined to report on the conference. I had in my hand a secret weapon: A conference badge given to me the previous evening, without my asking, by an employee of a major software company, after I told her about my hopes to infiltrate the conference.

First, though, I had to charge my horribly obsolete iPhone so I took a seat in the lobby next to an outlet. Minding my own business, in other words, and safely in the non-ticketed, public area of the conference. I had the badge around my neck, facing inwards. I was not long there before the hotel floor boss --- whom I'd identified in my earlier post as "a portly man with a South African accent" -- marched across the room, heading straight for me. I put my book down. I'm getting used to this.

“I’d like you to show me whose name is on the badge you are wearing.”

I showed him. I want to make clear again: I was still in the public lobby. My only crime at this point was that of possessing someone else's badge, with her permission.

“Now I have to ask you to come with me. Oh, and you should know, I am not South African. I’m from London.”

Either someone had tipped him off and demanded I be removed, or hotel security managers habitually read Pando. I assume the latter. We're a big tent.

I stood up, gathered my things, and amiably followed him from the lobby.

“'Portly' may be an accurate description,” he said, “but I’m actually quite athletic. Something I hope you won’t have to discover for yourself.” I remain somewhat doubtful, but didn't push the point.

He walked me to the registration, where he introduced me to the three Re/Code staffers manning the desk. They grimace-smiled and said hello. I explained how I’d got my badge. More grimace-smiles as the women conferred with each other. Apparently the software employee had been by the desk earlier in the day to request a replacement badge. Kara Swisher may not have the personality to kick me out, but fortunately she employs others who do.

The portly manager took over again:

“Now I’m going to have to ask you to leave the property immediately. Which you will do.”

He called to a subordinate.

"Can you please escort this gentleman outside?"

That's the British for you: Always so well mannered, even under pressure.

On our way out, my escort could barely contain his amusement at the bizarre scene.

"What you do, man?" he asked me, chuckling, as he walked me out.

[Editor's note: Pando contacted Patel several hours before publication to confirm his "Don't fuck with me!" quote. He did not respond. - PBC]