A clue emerges in the curious case of "Iterating Grace"

The trailblazing, first-generation computer programmer Alan Kay once said that you can divide the pioneers of personal computing into two camps: those who read and those who didn’t. (I read about that in John Markoff's excellent "What the Dormouse Said.")

Based on my experience of the heirs of those pioneers, I’d say Kay’s rule of thumb holds. This week, however, a mysterious stunt has induced several of Silicon Valley’s leading thought leaders to read at least one book. Its name: “Iterating Grace.”

Alexis Madrigal, editor in chief of the ABC-Univision experiment Fusion, broke the story on Monday. He had received the slim tome, hand-delivered to his mailbox in Oakland and devoid of postmarks or any indication as to its origin. The story inside, interspersed with hand-lettered transcriptions of VC Tweets, was, so Madrigal opined, “brilliant.”

Madrigal has published two articles and many tweets concerning the mysterious case, including publishing the book in full on Fusion. He set up a Google Doc for all the recipients to list their name, the name of the ostensible sender on their envelope, and the number of the print they received (the inside cover of the book indicates that there are 140 copies, and each has a print number.) Madrigal believes there may be an acrostic Tweet-length code to be ascertained from this ordered list. 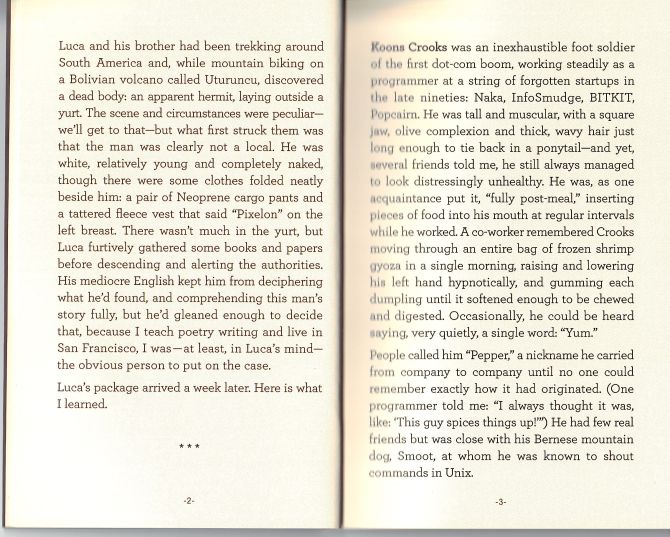 Speculation abounded in the Twitter-sphere among the book’s recipients, which include top editors and writers and authors in the domain of tech media.

Yesterday, in the upper-right cell of that Google Doc, an anonymous comment appeared that read “hint--look through the notebooks at Farley’s Potrero Hill.”

About an hour ago, I was sitting in Farley’s when Madrigal came in off the street and began grilling the baristas as to the provenance of a dozen or so tattered artist’s chapbook on a shelf against the wall, explaining the saga of the books’ arrival and his quest to discover their offer. I introduced myself and asked him to sit down, explaining some of the clues I’d found but none of my conclusions.

Among those clues: a cryptic symbol (above) attached by way of signature to the prolific entries of an artist/diarist with a penchant for meticulous hand-lettering. The name of another artist associated with the first. An indication of the age of these people, which lined up with the working assumptions Madrigal had so far arrived at. The fact that the journals are part of the longstanding 1000 journals project, each one of them numbered, and that the organizer/originator of that project seems to be the same person who writes in distinctive chancery and signs their authorship with a strange collection of glyphs.  Nothing conclusive, but, in the spirit of the Crying of Lot 49, work to be done.

“I’m the editor-in-chief of [Fusion], and I really don’t have the time to be doing this. I was taking interviews in the Lyft on the way over here. I’m doing this after my wife and kid have gone to bed,” Madrigal said.

“If this person or people don’t out themselves, it’s going to drive me crazy. It’s frustrating, you know: just let me play the game, arrange to meet me under an overpass and then don’t show up. But leave some clue. Just something. I want to play.”

“I talked to [Chris] Sacca,” Madrigal told me. “He said only ten people know the address of the P.O. box the book was delivered to. Another investor I talked to was pissed they had her address. She’s totally unlisted.”

When I first heard of the book and the “media strategy”, I reached out to Ryan Holiday, the author of “Trust Me I’m Lying” and a veteran of manipulating the internet press. He responded by email:

“What fascinates me is how easy and simple it is to turn these supposedly cynical or protective journalists into conduits for the propagation of a message or stunt or project. I'm sure Alexis would argue that this is all in good fun and that readers clearly see it for what it is. The reality is--like the Ship Your Enemies Glitter stunt--is that the patterns of the press are so easy to predict that decently clever people can very easily find a way to make them dance exactly as they want.”

It’s unnerving to take part in propaganda the vector of which remains completely unknown. Especially for a journalist, who's job consists in seeing all the angles, best as one can. Of course, this is not the first time such a campaign of media-perplexing art has been successfully waged.

"The future always looks good in the golden land, because no one remembers the past... Here is where they are trying to find a new life style, trying to find it in the only places they know to look: the movies and the newspapers.”

Why do I care who is behind Iterating Grace? Is it some egoistic blend of schadenfreude and what the kids call FOMO and Bible calls envy and my analyst calls insecurity? I hope not, but maybe.

I’d like to think my unbidden pursuit stems from a deep sense of relief. I’ve lived in San Francisco just long enough to sense what it now lacks. This week so far I’ve been making a circuit of the city’s nightclubs, bars and galleries, drinking for free and mostly slipping in univited to Apple conference after-parties. I have yet to see anyone dance.

Put simply, art in San Francisco has receded. Been subsumed by “design thinking” and reworked towards goals and objects not its own. The fact of having a purpose at all, of course, is anathema to a certain conception of art, one which I share.

To me, the best and juciest part of this high art is the way it has taken the networks of tech journalists and the thinkers we often cover as its canvas, triggering an autonomous response by media types through the insertion of a twee and harmless little novella delivered unsettlingly to their personal addresses. It’s the combination of disturbing invasiveness and inscrutability with the coy satire and playful appeal of the book that gives whatever art this is a power of its own.

Forty years ago this July 4th, a media event of similar proportions was held at the Cow Palace of San Francisco by the avant-artist collective Ant Farm. The event was called Media Burn, and centered around a Cadillac being driven into a flaming pyramid of television sets. The TV crews that had been invited to bear witness, and had dutifully appeared, didn’t know what to make to make of it. Yet couldn’t help themselves from putting it on the nightly news.

An interesting thing about the Ant Farm. Formed in San Francisco in 1968, it’s founders are among a rare breed of artists from that time and place that stayed on through the ensuing decades. One of them, a Farley’s barista informed me today, remains a fixture in Potrero Hill. His name is Curtis Schreier, but he also goes by the nom de guerre the Architect of Desire. A close friend of Schreier, who thankfully signed her real name in her notebook entries, tipped me off this morning that the mysterious glyph signature peppering the notebooks is none other than that of the Architect of Desire.

Of course, this could all be a very clever and more or less deliberately placed red herring. There is very little connecting the notebooks and "Iterating Grace", beyond the anonymous Google Doc tip. The subject matter of Schreier's entries in the 1000 Notebooks reveal him to be concerned with media, technology, pop-culture, typography, poetry and myth. And inscrutability. But that's hardly a smoking gun, I'll admit readily.

Unlike Madrigal, I would really rather the author didn't come forward. I'd prefer this art to defy and exceed the crude positivist grasping of journalism. I'm a happy dupe, for once, in the surmounting of science and literalism by art.

And I'm not sure Alexis Madrigal isn't in on it, after all. Toward the end of our conversation, we talked about the list of suspects.

"Of course the most obvious answer would be that it is me and Mat Honan. But it's not. Otherwise I wouldn't be here investigating these notebooks."

Soon thereafter, he raised the prospect of Ant Farm. I'd already spent the morning chasing down Schreier, sending him an as-yet-unanswered email. Bothering his friends.

“It almost reminds me of Ant Farm and Media Burn. Have you heard of them?"

"Yeah. They are some of the only people that could pull something like this off. But I don't know, are they even around?"

Who can you trust?