Yesterday, Kevin Kelleher wrote an excellent breakdown of Facebook’s second quarter earnings, and Wall Street’s typical “sure you created a $3 billion a quarter mobile ad business from nothing, but what are you going to do next” response.

But I found one fact that came out of it just staggering: Facebook Messenger-- launched just earlier this year-- has 700 million monthly users. Compare that to 800 million for WhatsApp-- a company that Facebook-- the only $100 billion super unicorn of the last cycle-- gave up a whopping ten percent of its market cap to acquire.

Mark Zuckerberg handily broke it down in a graphic he posted on Facebook yesterday: 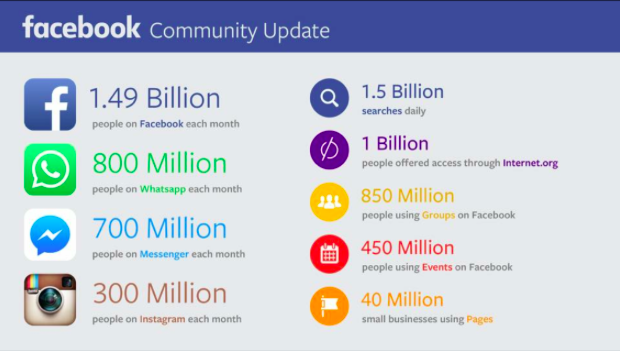 Now, critics will say there’s nothing so great about messenger. Facebook is a huge platform and of course it can “organically” grow something incredibly rapidly.

This is partially true. But remember, Facebook has built product after in-house product that have absolutely failed to catch fire. Remember Poke? And while Instagram grew substantially after being acquired by Facebook, it’s “only” at 300 million users. So it’s not like anything Facebook touches turns huge.

Now, granted, in the case of Messenger the tactics were far more aggressive. Facebook ripped messaging out of the core property and forced users to download a separate app and become Messenger users if they wanted to one-on-one chat with friends. With 1.5 billion people on Facebook, of course that’s gonna result in some kind of big number, unless there’s absolutely no engagement with the core product.

But with so many messaging apps out there, it wasn’t a fait accompli. Facebook deserves credit: Not only did it take an aggressive, decisive tactic and stick to it even in the wake of a backlash, it delivered an excellent product on the other side. That’s something Facebook hasn’t been able to do in a long time.

The aggressive approach itself wouldn’t have been enough. As I wrote earlier this week, Google tried even more aggressive tactics to brute force Google+ into all its products. It backfired tremendously, because Google+ just wasn’t a great product for a mass market.

And here’s what’s fascinating to me about Messenger... and the strategic brain of Mark Zuckerberg. When he hired David Marcus away from PayPal to run Messenger it made sense to almost no one. Not Wall Street. Not eBay’s board. Not even many friends of Marcus whom I spoke to. Why on earth would you leave a heroic turn around of a core Web brand like PayPal to go be a middle manager at Facebook? I heard people say they’d never work with Marcus again, because it was such a seemingly capricious move.

There were seemingly three reasons most people didn’t understand at the time. One: Zuckerberg heavily and personally courted Marcus, the way he did with Instagram CEO Kevin Systrom and the Whatsapp founders. Surely he doesn’t have the time to do that with each hire. But for some reason, this one mattered. Second: By all accounts, he offered Marcus an incredibly lucrative package. People described it as essentially an “acqui-hire” of one guy. And third: He obviously had a dramatic plan for Messenger that Marcus couldn’t pass up. And in hindsight, he was smart not to.

It’s hard to know if PayPal would have spun out on the same timeline had Marcus stayed -- some say having to name a new president forced the decision, others say it didn’t. But he likely wouldn’t have stayed CEO if it had, given his limited experience in a job like that. Compare the two and leading Facebook Messenger seems a lot more exciting right now. None of the public market heat, and massive tailwinds from Facebook to build something huge.

No matter how much Zuckerberg “paid” for David Marcus and team-- $5 million? $15 million? $20 million? $50 million?-- even at the craziest end of the rumor mill, it was a bargain compared to what he paid for Whatsapp for roughly the same size property. Admittedly, that’s not a totally fair comparison. Whatsapp is a different demographic, valuable in its own right, with actual paying users. And part of the value was taking out a potential competitor to Facebook’s dominance. So I’m not arguing he should have let that one go and just executed Messenger. But what’s impressive is that even after paying $20 billion for Whatsapp and Instagram, he still did a plan as aggressive as Messenger-- a move that looked like a desperate Hail Mary-- too.

With four properties ranging between 300 million and 1.5 billion users, even the big hold-out Snapchat doesn’t look like a threat to macro-Facebook at this point.

Despite respect for Marcus and his team, I was a total skeptic of Messenger, having seen lousy product after lousy product come out of Facebook in its post-IPO life. I was as annoyed as anyone that they were making me download something new and put it off for months, telling people who tried to message me to just email me instead. But I have to say I’ve gotten absolutely sucked into it. I’ve been using it more than Snapchat on my phone, and definitely more than text.

Last month at Pandoland, we did an onstage interview with Stan Chudnovsky-- Marcus’s top lieutenant at PayPal who totally unsurprisingly followed him to PayPal where he’s worked with him on Messenger. Chudnovsky is quietly known as one of the best growth hackers in the Valley, as such he was a big part of this plan. (Disclosure: Chudnovsky is also a Pando investor.)

We asked him about the Messenger phenomenon and what is coming next. The interview is below. Spoiler: It’s gonna be a lot more than just chat. Watch this to understand a bit more of what Zuckerberg & Co. are thinking here. I wouldn’t be surprised if it surpasses Whatsapp by the end of the year.