Lyft is insanely worried about pissing off drivers. Why isn’t Uber?

As Uber drivers protested fare-cuts on both sides of the country, vowed a mega-protest at Sunday’s Super Bowl in San Francisco, and referred to Uber’s cuddly new logo that was supposed to be a sign of true changes in its soul as “an asshole,” Lyft finally decided to differentiate.

In an email to drivers February 2 (full text embedded below), Lyft made very clear that it heard drivers, that it knows they are hurting, that it wants to brainstorm solutions with them, that it is upping perks and driver bonuses and still encouraging tips. And most of all that there’s one real culprit for all of this: “The competition” that keeps lowering prices. Ie: Uber.

Of course, Lyft isn’t differentiating in the most important way: By not cutting rates. It explains up top why it can’t:

There are two interesting things about this graph. The first is it utterly flies in the face of what John Zimmer said a year ago at PandoMonthly when I asked him if Lyft and Uber were basically just locked in a battle of a commodity product-- similar app, same service, same drivers in many cases-- where lower price was the only determiner of who had bigger market share. I asked the question because Peter Thiel is a backer of Lyft, and I’d just read his book which described this dynamic as the exact worst kind of startup to back. (Thiel is also a Pando investor.)

Back then, Zimmer said the market was big enough it didn’t matter, and there’d be enough differentiation beyond price. And maybe that was the view then. But it’s clearly not now. It’s all about price.

Which leads me to my second point: VCs, analysts, and the press keep saying that Uber deserves such a rich valuation (reminder: highest for a private company in Silicon Valley history) because it’s a real business. I’d accepted that as fact as well.

But increasingly, I’m wondering if the economics of ridesharing actually do work in their current form. They don’t seem to.

Watching this open, nasty fight Uber is in with drivers -- cutting them to $.30 a mile and telling them to make it up in volume, blocking them on Twitter, sending an admin to record license plates at protests and then lie about where he works, continuing to send out Tweets reminding riders there is no reason to tip-- there are two options:

Here’s something I bet you’d never thought you’d see: A post where I argue that Uber isn’t (merely) an evil, uncaring organization who enjoys fucking over the people who got it to this point. Not because I think Uber has a giant heart, but because I think it has a giant strategic brain.

Let’s look at what we know: Uber continues to cut prices in the United States because lower prices are crucial for Uber to replace car ownership. That after all, is its own rationale for why Uber is worth so much more than the cab industry.

Up until this year, Uber was fighting so hard to court drivers it was paying signing bonuses and hiring workers to pose as Lyft riders to steal Lyft’s drivers onto its platform. Those little guys who twirl signs were on every San Francisco street corner hawking Uber. Ads were everywhere telling you how much you could make as an Uber driver.

Why would Uber suddenly on a dime decide it didn’t need them after all?

The popular answer is BECAUSE SELF DRIVING CARS! But as Pando, The New York Times, Robert Scoble and many others have written before, true self-driving cars that wouldn’t require a human are at least six years away by the most optimistic predictions. They are more likely ten years away.

Six years is short when you think of such a radical shift for consumers, but it’s an eternity for a tech company. As a reminder, Uber has only been in business for seven years. Over these next six to ten years, Uber is going to need to continue to grow and at some point exit. And it has a high valuation it needs to grow off of.

And other analysts have pointed out that once we get to self driving cars more entrants come in. Google for years has had its own vision of how pods of self driving cars route you around cities. It’s not clear that Uber has the same advantage it has in the market now once that shift occurs. It’s unlikely to have a capital advantage against Google, Apple, Tesla or potentially others.

This assumption that Uber simply doesn’t care about drivers because self driving cars are the future can’t be the reason for Uber’s callous and sudden about face in 2016. The company knows it's too far off. This company doesn’t think short term.

And the about face is just too great. To go from trying to do anything it could to sign up more drivers to cutting their income to a point where some drivers are effectively paying Uber to drive people around cities? And meantime, increasing Uber’s own cut out of those very same transactions?

Add to this, we know Uber’s reputation as a nasty company bothers it. It bothers it enough it’s hired high-level reputation fixers and Kalanick has done half a dozen media tours to rehabilitate his image. The recent logo rebranding was an attempt to soften its image by softening its logo. Think of how risky that is when you rely on people to “push a button” to get a car. If they don’t recognize the button, you could have a bad month.

Uber usually makes decisions for one of two reasons: Its valuation or its P&L. Remember: Travis Kalanick is a guy who said “on bad days I look at our revenue graph”.

I’ve spoken to people close to the company and the industry for weeks and such an extreme about face can only explained by three things:

If #2 is true in the US, it’s worse overseas. In China, the largest ridesharing market in the world, Uber spent $1 billion on subsidies last year, put another $500 million into Uber China’s fundraising that it couldn’t complete. And this year has said it will expand from 22 cities to 100 cities. And it’s only gained 11% of the market. (Uber claims it has 30% market share in China but no third parties confirm that and it defies logic given its tiny geographic footprint compared to market leader Didi Kuaidi.) Uber is spending another $1 billion on subsidies in India. That’s just two countries of its planned global domination.

And those subsidies have encouraged fraud as high as 30% by some independent accounts. Sources are telling me in developing markets there’s another issue: Rides priced artificially low may be bringing in a Groupon-like audience. People who will be Uber customers at an artificially low price, but not once the price goes up. We’ve heard that some of the local players have actually started upping their prices to get a true sense of where the sustainable market for these services is.

I’d previously assumed that the new ambitions to deliver food and goods (and when it has bad press: PUPPIES TO NEWSROOMS ACROSS AMERICA!) was just another growth story Uber needed to boost its valuation. But maybe it’s about finding a way for each ride bring in more revenue, because the current economics don’t work when you have to:

And here’s where self-driving cars do come into the conversation. Is it possible that this is one of those businesses like we saw in the late 1990s? The ones that absolutely proved to be huge opportunities, but back in 1999 with the limited footprint of the Web and capital associated with building a Web business just didn’t work. The kinds that suddenly looked great a decade or more later.

Does this business, at this scale, with these types of growth assumptions and market cap assumptions only work in an era of self driving cars? Is Uber either wildly overvalued on a story of car replacement and global domination that its economics won’t allow, or simply off by ten years?

Best case scenario, Uber increasingly looks like this generation’s Amazon.com-- a company that will have to ignore everyone and keep raising money to grind it out until the economics suddenly work. That’s not a bad thing to be, but depends on Jeff Bezos like execution to make it out the other side. Uber could do that. It has the cash, the lead, the revenues, the backers, and the Machiavellian do anything attitude to get there. It’s wisely held off going public so none of us know what’s really going on with these economics beyond well choreographed leaks.

But worst case, it may be this generation’s WebVan.

Either way, it’s clear Lyft’s economics and driver relationships are a slave to Uber’s. Full text of Zimmer’s email is below.

Thanks to all the drivers who have reached out the last few weeks with ideas on how we can work together while the competition lowers prices. Along with the feedback, there is a collective desire for the Lyft community to succeed. And to continue our transparency with you, I want to directly answer common questions and provide some quick action steps.

Does Lyft need to lower prices when the competition does?

What can Lyft do for the community to help continue improving this dynamic?

We recently invited drivers from across the country to sit down together and brainstorm solutions. On our end, we’ll continue to fund Power Driver Bonuses and enable tips on the platform. Combined, these two programs give you the opportunity to earn 25% more than with the competition — and with Express Pay, you can access that money immediately. In the last week alone, Lyft paid out $1,000,000 in Power Driver Bonuses. Together, these exclusive programs have now led to $100,000,000 in additional driver earnings.

Additionally, we’ve already implemented the following ideas that came directly from your fellow drivers, credited below:

Double bonuses for passenger referrals ($20) in cities with recent pricing adjustments. Ultimately, the Lyft community gains more control over pricing by increasing the number of people who use Lyft. For the next month, we have increased your bonus to $20 for each new passenger referral. Learn how to refer. — Sharlett, San Francisco Lyft Driver

Monthly HQ-sponsored driver meetups. The bonds you create with each other strengthen our community, too. Lyft’s General Managers are working with local drivers on a calendar of community events, funded by Lyft. — Sergio, San Diego Lyft Driver

Lifting the cap on Prime Time. We will no longer cap the percentage, except in emergencies. — Angel, San Francisco Lyft Driver

In New York City, free car wash for drivers. This week we’re also saving you this expense, as an added bonus. Watch for a text later today.

Sharing our mission with passengers. My co-founder Logan and I sent an email to passengers last week sharing our ethos about great service and taking care of the driver community. Here’s the full email, with some highlights of passenger responses below. — Ariana, Detroit Lyft Driver 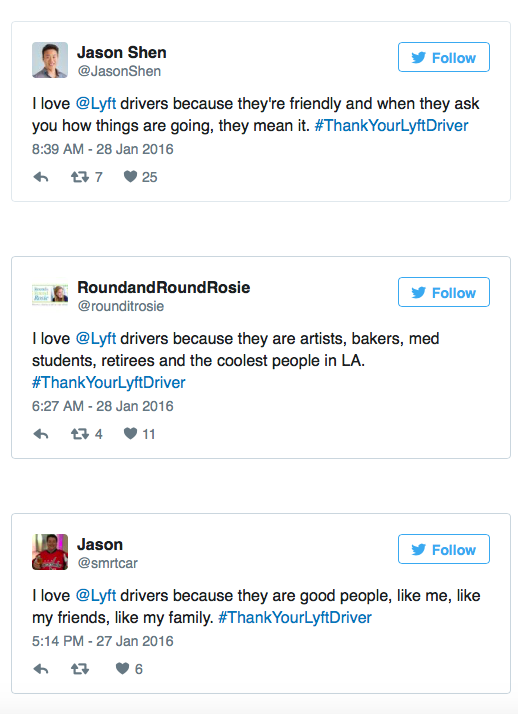 We will continue to listen and work together with you to make sure Lyft is the best platform for you and the passenger community.